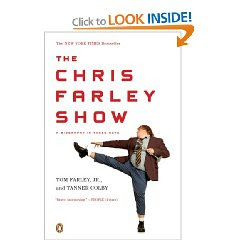 The Chris Farley Show is the biography of one of history's funniest comedians to grace the stage, television, and movies. Though I had only seen Chris Farley a few times and though times that I did watch him on tv he made me laugh. What I found very interesting about this biography was that Chris was very religious about his faith. There are very few celebrites who stand up strong for what they believe in. Even at a young age Chris was making people laugh.

The most enduring quality I learned about Chris was that he had a really big heart. He was the first person to step up and lend a helping hand, no matter who they were. He never threw around his fame. I enjoyed reading about Chris and where he came from. He was surrrounded by many loving family and friends. The saddest moments were when Chris would slip and drink and do heavy drugs. Everyone around him tried to help him except for his father. This wasn't because he didn't love Chris but because then he would have to admit he had a drinking problem as well.

For anyone who is a fan of Chris Farley and wants to know more about him then you should read this book. Chris's life story is shared by everyone who was there with him from his high school buddies to the people who worked with him on SNL, up until the very end of this short lived life. This biography also includes pictures.
Tanner Colby Tom Farley Jr.

Ruth King said…
I'll have to pick this up for my mom. She and I were (and still are) big fans of Chris Farley. She loves reading biographies and I didn't know there was a book about him available. Thanks for the great review!
June 6, 2009 at 1:00 PM

Mishel (P.S. I Love Books) said…
Excellent review. I just posted mine today. I really enjoyed the book. I am such a fan of Chris and the book helped me discover who he was behind the all the laughs.
June 28, 2009 at 8:00 PM