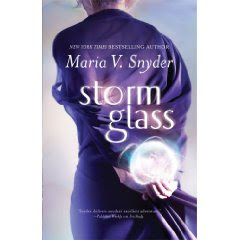 It can be very hard being the only student at school, when everyone considers you to be a one trick wonder. If anyone would know, Opal Cowan would. Opal is a glassmaker. As if only having one power wasn't bad enough, Opal also has to contend with the fact that she poisoned Yelena. Though Yelena has forgiven her and Opal can now call Yelena her friend.

Someone or some ones are sabotaging the Stormdancer clan. Their glass orbs are the clan's most powerful weapon against the storms energy. The Stormdancers use the orbs to contain the storm's energy. The problem is that the orbs keep breaking. This is a very bad thing, because for every orb that breaks a Stormdancer dies. The magicians have called a meeting with Opal. They tell Opal that they want her and second magician Zitora Cowan to travel to the Stormdancer clan and help figure out what is causing the orbs to break. It won't be easy as someone is after Opal. Opal will have to dig in deep within herself for the magic that she possess.

When I first heard that Mrs. Snyder was coming out with a new series, I was beyond myself excited. I loved her previous series with Yelena and was sorry when it ended. Maria V. Snyder is the first and only author who has ever truly turned me on to these types of books that incorporated fantasy and magic. I can still remember when I first read Poison Study. I finished the book in a matter of hours. I can also remember experiencing the tragedy when the release date for the next book kept changing. What I really loooooove about Mrs. Snyder's new Glass series is that it features Opal, a minor character from the prior books and allows her to become the main character, so that readers and fans can root for a new heroine. I am sitting on the edge of my seat for the next book..Sea Glass. I agree with Maria and the fact that I too also want to be a Stormdancer. I have one last comment and that is run to your local bookstore and treat yourself to a top rate author and her books!
Maria V. Snyder

Cheryl said…
Ann Marie - No you do not have to read the other books first as luckily this book is the first in a brand new series.

Lexie said…
Ann Marie to caution you though, events and people from the previous three books will be mentioned and show up. Storm Glass does a great job recapping the important pieces, but I definitely think that if you can read the 'Study' novels you should to a get a fuller picture of the world and characters.

Cheryl--I felt the same way you did when I first read Poison Study. I wasn't sure what to expect, but it certainly had me hooked and geared up for more!

I'm so excited for Sea Glass' release!! The Stormdancer's living arrangement certainly suit me just fine (I always joke that I want to be the old lady who lives down at the bluffs when I grow up...)
May 3, 2009 at 9:30 PM

Unknown said…
Thanks for the info, I think I will get the previous books that way I will know some background on the other players. Have a great week everyone.
May 4, 2009 at 7:06 AM