SEALed with a Promise 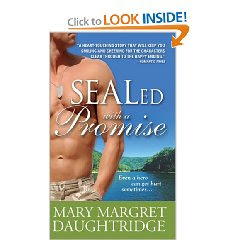 Navy SEAL Caleb "Do-Lord" Delaude grew up dirt poor. It was only him and his mother. His father left them. His fahter could have done something about their situation as he was wealthy but instead he never acknowledged them. Caleb decided to make something of his life and joined the Navy. He trained hard and became one of the best SEALs the Navy ever had. He vowed though to get his revenge aganist his father. No matter how long it took.

It is at Jax's wedding, where Caleb is best man that he meets Emmie Caddington. She is a bit of a wallflower. She dresses in bland clothing that does nothing for her figure. She is happier to let someone else be in the spot light then her. Caleb learns that Emmie shares a connection with his father. He decides to get close to her and in turn bring himself one step closer to his father.

SEALed with a Promise is the second book in this series. SEALed with a Promise turned out to be a ok read. I really enjoyed reading about this brand of Navy SEALs. Besides who doesn't love a handsome man both in as well as out of uniform. This book is Caleb "Do-Lord" Delaude's story. Caleb is the type of guy you picture when you dream of a Navy SEAL. He is tough, made of steel and gets the job done. On the other hand, I also found him to be a little stand offish and a bit of a bully. I don't know if this was because of him being a SEAL or not. He was bossy towards Emmie, which I didn't see any reason why he had to be so mean. Emmie really frustrated me. She was weak and would let people around her try and dictate her. She didn't really stand up for herself and act till about a third of the way from the very end. Mary Margaret Daughtridge is a new author to me. I do have to say that I am glad I gave her a try.
Mary Margaret Daughtridge