April 06, 2009
Ladies get ready to meet the men of your dreams. I am honored to share with you my interview with Mary Margret Daughtridge.

Thank you, Cheryl. I like answering questions better than trying to guess what will interest you or your readers.

I’m an NLP Master Practitioner. NLP is the stuff the guy on “I Can Make You Thin” uses. And yes, it really is that effective for change work—though I don’t like to do weight issues. I think other kinds of change are much more likely to pay off in increased happiness.

Although I’ve written all my life, I never considered myself a “writer” until I decided to write a romance novel. It was like I finally found out who I had been all my life.

What is your favorite food?

Now that’s a hard one! I’m a bit of a “foodie.” Making up my mind in a restaurant is a struggle because I want to try everything. I slyly encourage my fellow diners to order different selections, so I can taste theirs.

If I had to choose a food, I’d say eggs. I like them whether boiled, fried, poached, or baked. And I like all the egg-based recipes like frittatas, soufflés, quiches, custards, and mousses.

One of my most favorite dishes is spoon bread, a southern recipe. It’s not really a bread. It’s more of side dish made of eggs and cornmeal. Butter it, serve it with some steamed asparagus and you have a meal.

There are two kinds of vacation. The kind that I save my money for are out-of-town workshops. I get to travel, I’m guaranteed interesting people to hang out with, and learning something new is always just plain fun.

For the laze around, eat too much, and read for hours kind of vacation, nothing is better than my beloved Topsail Island, where SEALed With a Kiss is set. From Topsail, it’s only thirty minutes to Wilmington NC where I happily play tourist in the historic section. I used Wilmington as the background for SEALed With a Promise.

What was the best advice ever given to you?

“Do what you love,” is always good advice, but there’s more to it. On the way to being published you will have to read your book over and over and over. You had better begin with lo-o-o-ving it!

What made you decide to write romances?

I’m taking the above advice. I’m writing what I love. I love character study, I love examining relationships, and I love a story that offers hope. I love thinking, in some small way I’ve contributed to people’s lives. While I appreciate great literature, the books that have gotten me through the really dark periods in my life were all genre fiction.

Of all the genres, romance is the most psychological. It gives the writer scope to explore the characters’ motivations at every turn. I’m able to draw on my personal strengths of understanding what makes people tick, having a high tolerance for ambiguity, and being non-judgmental.

A romance novel at heart is always the story of a relationship. If a person likes to think about relationships, examine them, study the different components, what better genre than romance?

My books are fiction. Still, my personal goal for every book is to create a relationship for good, but not idealized, people that would work in real life.

How much research do you do for each of your books?

I have no idea how to quantify it. I’m an omnivorous reader, I love to learn, and I have a most retentive brain. I set out to learn one thing, but that leads to something else and something else. My fear is that I will accidentally plagiarize since I draw from so many sources and my memory for when and where I picked up an idea is capricious.

One good thing about it. I now have an excuse for wasting hours tracking down this or that arcane bit of trivia. I say “I’m researching.” [snicker]

I also get to do my other favorite thing which is talk to people about their lives. When it comes to capturing SEALs in a way that’s believable, the most helpful research has been interviews with former SEALs.

The first person who got SEALed With a Promise was me! I didn’t start out meaning to write a SEAL series. I only intended to create a foil for Jax in the opening scene of SEALed With A Kiss, but the name Do-Lord popped in my head. The next thing I knew I had promised (note the word) I’d give him an HEA of his own.

But I ask you, what kind of name is Do-Lord for a romance hero? The kind who hides his genius IQ behind slow-talking, good ole boy charm, that’s what.

There’s a little well-controlled bad boy in every SEAL. In Do-Lord there’s a lot. He’s learned most of what he knows about honor, loyalty, and responsibility from being a SEAL—not from his boyhood on the dirty fringes of society. Only a few SEALs know how brilliant he is, and none of them know who Caleb DuLaude really is.

Caleb AKA Do-Lord has an old, old score to settle with the hugely powerful US Senator, Teague Calhoun, and because he’s a SEAL, he has the skills. All he needs now is an opportunity. His only limitation is that he cannot allow his actions to bring dishonor to his fellow SEALs.

What better camouflage for his interest in Calhoun than a friendly little fling with Emelina Caddington, PhD, who has entrée into Calhoun’s inner circle?

Emmie might be an absentminded professor, but she’s no dummy, and she knows a bad boy when she sees one. She’s thought she was one of a “couple” before and been wrong. From now on, she’s not entering any relationship unless it’s SEALed With a Promise.

How many books can we expect there to be in your Navy Seal series? 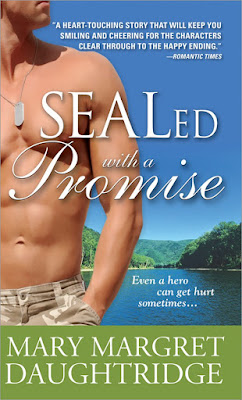 Honestly, I don’t know. Every time I think this book may be the last, another guy pops up and says, “I’m next!”

Right now I’m working on Davy’s book. You’ll meet him in SEALed With a Promise.

A young George Clooney lookalike, Davy’s life has always been easy. Charmed really. He’s always said, if he died for his SEAL buddies, he’d die happy. Everyone tells him, when he’s blown forty feet by an enemy grenade—but not killed—it’s more proof of his phenomenal luck.

As far as he’s concerned if he had died that day, he would have been happy and his family would have been better off. Because unfortunately, he was literally worth more dead than alive. Now to pull his family out of a financial crisis, his only choice is to marry a woman who needs a husband, quick, but doesn’t want one.

In one way though, his luck is still holding. She is hot!

JJ thinks she’s getting a man who will never be around. She should think again.

Working title: Her Fate Was SEALed.

I thought Davy was the last one, but when Davy suddenly had to get married, a fellow SEAL named Garth Bladen came along to stand up for him.

Behind his back, some guys in NAVINTEL (Naval Intelligence) call Garth “Darth Vader.” They do not call him that to his face.

If your books were to be made into movies, who would play the parts of the leading men?

Matthew McConnaughey would be Do-Lord for sure. McConnaughey’s bad-boy twinkle that makes him look like he’s laughing at some joke only he knows, and his Texas drawl, capture Do-Lord perfectly.

Jax, hero of SEALed With A Kiss? I don’t know. Nicholas Cage is a little too old for the part now but Jax has the same straight eyebrows and the very focused, intelligent look. The Nicholas Cage in Guarding Tess would be perfect. Jax has “Patrick Dempsey” eyes and that same warm but slightly distant look Dempsey wears. Maybe one of your readers can suggest an early-thirties actor with the same qualities.

How about a question for them?
As you can see, what my heroes have in common is their smarts and their drive. Looks aside, what qualities attract you most in a hero?
Mary Margret Daughtridge