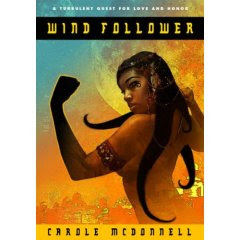 Although it is not entirely to her liking, grief-stricken Satha, a dark-skinned woman from a poor Theseni clan weds young Loic, the wealthy Doreni son of the king's First Captain. Loic, graced with ability to see into the hearts and minds of others, begins to help Satha overcome her sorrows. Despite coming from different tribes, they begin to forge a life together. But when Satha's own compassion is used against her and a treacherous enemy contrives to dishonor her in Loic's absence, Loic's love turns to anger and disgust. Embittered, Loic must still avenge his honor and Satha's and he sets out on a journey that brings despair as well as spiritual discovery. Battling him are the Arkhai, the spirits of the land who know his quest will lead him toward the God whom they have usurped. After his departure, Satha is kidnapped, sold into slavery and learns, first hand, how cruel the pioneering Angleni tribe can be. Both face great hardship, danger and anguish apart, but with the Creator's aid there remains hope they will be reunited and heal the love the world has torn as under.

I have to admit I have been wanting to check out this book for a while, so when I won it from J. Kaye's book blog I was excited. So when I read this book I was a little disappointed and still a little confused about what really took place suring the story. Now it could have been partially due to the fact that I was reading it at work so when I got a break or lunch ai would read it and could only get into about 15 to 30 minutes at a time to dedicate to this book. Now don't get me wrong as this could be a good book and maybe when I get the chance I will try reading it again but I actually finished this book about a week ago and just now got around to reviewing it as my third and final book for the Heard It Through the Grapevine Challenge as I was having a hard time trying to figure out how to write the review.
Carole McDonnell