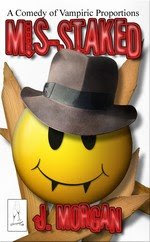 Check out my review of a really good comedy about vampires.

Breathred E. Petrifunck is a virgin who lives in the basement of his parent’s house. He received his degree in vampire slaying from The Boffrend School of Vampire Slaying. Stud Lee Monkey is a talking chimpanzee who is Breathred’s familiar. Also there is Petrifunck’s girlfriend Luna. She has a secret of huge proportions. Okay, these are the good guys and now on to the bad guys in the book. First there is Leopold du Chambris Portusm, a vampire prince who loves shopping. Next is his lackey Lewis. He can be pretty dimwitted at times. They want to resurrect the queen so they can rule the world.

Every vampire slayer needs to get this book by author Dr. William Wainsboro, author of the Boffrend School of Vampire Slaying Handbook, Volumes One through Thirty-Seven. Breathred refers to it as his bible. It has a great wealth of knowledge like always discuss your fees up front first, vampire slayers are to wear black leather bodysuits, and Dusk to Dawn is not just a movie but a way of life. This book was written as seen through the eyes of Stud Lee Monkey.

The prophecy states that the mother will rise to power again during the bleeding moon in addition to there being a sacrifice. It can’t just be any sacrifice but a thirty-five year old virgin who was pure of heart and a slayer of monsters. Professor Grayson at the university calls for Breathred’s services. She has unearthed an ancient tablet. Professor Grayson wants Petrifunck to come along as an advisor on her expedition. Will Petrifunck be up for the challenge or will it be too much for him?

Mis-Staked had me laughing from the very first paragraph. J. Morgan’s or actually I should say Stud’s witty sarcasm throughout the book was very entertaining. Mis-Staked’s very memorizing; it kept me coming back for more. Stud’s narration and his explanation of why things took place were comical. The challenges Breathred E. Petrifunck and his friends encountered were priceless, especially when he helped the little old lady with her vampire problems. Mis-Staked is a laugh a minute roller-coaster laughs till you have tears in your eyes ride. I recommend Mis-Staked.