Not in the Flesh 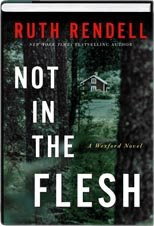 Searching for truffles in a wood, a man and his dog unearth something far less savory—a human hand. The body, as Chief Inspector Wexford is later informed, has lain buried for 10 years or so, cause of death undetermined.

The only clue is a crack in one of the corpse’s ribs.Now Wexford has his work cut out for him. Eighty-five people have disappeared in this part of England over the past decade. He and his team will need to interrogate everyone who lives nearby to see if they can turn up a match for the dead man.

Then, in the cellar of a disused cottage nearby, a second body is found. As Wexford painstakingly reveals long-buried secrets, Ruth Rendell proves once again why she has been hailed as our greatest living mystery writer.
Ruth Rendell

Becky LeJeune said…
I love Rendell's stand-alones. I started the last Wexford novel, but I always have trouble starting an established series at the end. Now I have my grandmothers old Wexford books and I can finally read them! Rendell is absolutely brilliant - can't wait till I get this far with them.
May 24, 2008 at 9:00 AM