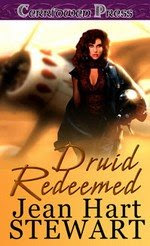 Devon Dellafield is the son of Lord and Lady Lance Dellafield. He comes from a long line of Druid women. Devon’s grandmother, mother, in addition to his sisters all have the Druid power. Jocie Summerhill is daughter to Professor Summerhill.

Jocie is arrested as a protester. She was brought before Devon since she was found in the company of a document with some weird writing on it. Devon is well-known for being excellent at decoding. He recognizes the writing as Ogham alphabet. It was used by ancient Celts and Druids. Instead of going to jail, she is put in the custody of Devon and his family for a month. In the mean time, Devon tries to make out the significance of the message. Not knowing that he has put both of them in harm’s way. As much as Devon does not want to acknowledge his Druid powers, he can’t deny the signs.


I received the opportunity to read Garland of Druids: Druid Redeemed which is a fantastic novel. Devon’s playboy ways are over and done with when he meets Jocie. These two characters are meant for each other, which is an excellent thing. You won’t believe what secret Devon reveals after he decodes the message that started it all. It will blow you away. I just have one final thing to say and that is don’t mess with Druids, or at least the Dellafield family. Jean Hart Stewart deserves praise for delivering this superb treasure.