A Thrill A Minute with Waking Brigid

May 02, 2008
I got a chance to pick this book up from Fallen Angel Reviews. I have to admit that I probably would have learned about this book much later if it hadn't been for my friend and fellow blogger Becky at http://nomoregrumpybookseller.blogspot.com/ . Check out her blog. She talks about books I never heard of before and ones I want. She scores so many great ARCs. It's a good thing I don't hold grudges or I might not talk to her for having so many get ARCs. (Just Kidding Becky)

Ok, So here is the book I wanted to share with you all today. It is called Waking Brigid by Francis Clark. 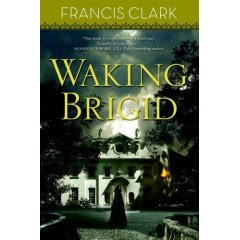 Sister Brigid Rourke was born with the gift of sight. Her family sent her away to a convent in Savannah, Georgia. Prior to the Civil War the city was peaceful but afterwards the city was not the same. Evil things are lurking within the city. While there, Sister Brigid Rourke hears the screams of a man locked in a cell by himself being murdered in the hospital’s mental ward. Right before his death the man started going crazy talking about the Devil coming for him. He was found with a crucifix in his hand that was partially melted around the edges. Mother Superior Mary Margaret presents Bishop Francis Marion Shea with the crucifix. As much as he wants to deny that Richardson was murdered by a demon, he can’t disprove the evidence. Bishop Shea knows the situation is more serious than an exorcism will allow. He calls for a Benedictine monk, Father Benito to lend a hand and hopes it is not too late. Father Benito recognizes Sister Brigid’s extraordinary gift. He trains her on how to make use of her powers.


Check out Waking Brigid as a group of nuns, bishops and the church’s secret society of mages battle against a group of Devil worshippers for the soul of the city. What the Exorcist did for movie fans; Waking Brigid will do for readers. Be warned as you just may be afraid to go to sleep after reading this book. Waking Brigid is a classic tale of good vs. evil to see who will win. I enjoyed this novel. Sister Mary Brigid was a wonderful character. Brigid’s faith was unwavering throughout the book. If anything the events made her stronger in what she believed in. I only wish I could read more books by this author. Unfortunately there will be no more books by this very talented author Francis Clark, due to his unexpected death in the spring of 2007.

Becky LeJeune said…
Hahaha! Thanks! Waking Brigid was a good one. I only hope they have plans to release his second title. Apparently he died just before Brigid was released. This was a pretty creepy one!
May 2, 2008 at 11:15 AM