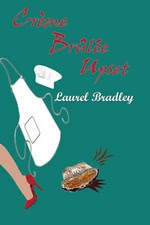 Mike Tucker has not seen Patrice Wilson ever since she left four years ago for Paris. So it was an enormous surprise when she shows up for his celebration in making partner. Patrice Wilson is now living in Chicago and top chef at Victor’s. She can’t wait to see the look on Mike’s face at the celebration. Mike ends up acting like a jerk at the party. He tells Patrice he doesn’t want her anymore in addition to unintentionally dumping a whole crème brulee cake all over Patrice. Mike’s roommates Randy and Alex could not believe how Mike acted at the surprise celebration that they helped arrange with Patrice. Now Mike will do anything to get Patrice back, his one true love. Patrice may be ready to pardon Mike but her friends won’t let her forgive and forget so soon. Friends like David Welsh, her best friend from high school who is now known as Doctor Delicious the ice cream guru or Bubba Scott, the Bears All Pro defensive end.


I have read quite a few books now from The Wild Rose Press. They just continue getting better and better. Laurel Bradley’s latest Crème Brulee Upset is no exception. I enjoyed reading it a great deal. It was hard to select who I liked more, the main characters Mike and Patrice, or their friends. Both of the mothers were equally humorous in their approach with the intention of trying to make them a couple. Doctor Delicious had tremendous advice to share with everybody over a bowl of one of his creations. For anyone who believes in second chances then this is the book for you.