The Pleasure of his Bed 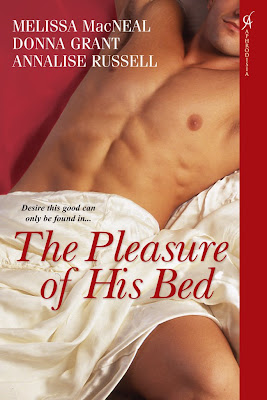 TIES THAT BIND in The Pleasure of His Bed anthology


A lustful, dominating queen has the tables turned on her when she’s sold as a sex slave to the very man she was supposed to marry.

Outskirts of the Quantra Province


If there was one thing Queen Jarina hated it was for her uncle to try and control her. She was queen after all, though he seemed to forget it at every turn.


Her uncle disregarded her order as he spun toward the small group of nobles gathered in the chamber. “She must marry. No woman should rule alone. Each of you know what type of damage a woman can get us into,” he all but shouted as he swung around and pointed to Jarina. “She’s young and doesn’t know yet her true position.


”Jarina had heard enough. She rose on shaking legs and glared at the uncle she had come to despise. He was the only family she had left, but there were times she could have cheerfully called for his beheading. And this was one of those times.


“You overstep your bounds, Ampyx,” Jarina said, her voice loud and carrying well in the high-ceilinged chamber. “Though you may be family, you do not rule. I do."


“I know that all too well,” he mumbled.


But loud enough that Jarina heard him. There was no mistaking the hate radiating from his gaze. She would have to be careful with her uncle. She couldn’t throw him out, he had too much power with the nobles, but she would make sure that power began to decline. Immediately.


”Jarina turned to the nobles. “Turg, was it not your people that disobeyed my father’s direct order to stand down against the Pereths?


”Turg had the good grace to lower his gaze. “Aye, your highness, that we did.


”Jarina whirled back around to her uncle. “I will get us out of this war that has all but brought us to our knees, and it will not be by marriage, Ampyx. Understand that now, for I will not hear another word on the subject.” She held her uncle’s gaze until he looked away and bowed, but not before she saw the malice lurking in his cold blue eyes. It was no secret her uncle wanted the throne. He had tried many times to convince her father to turn over the crown to him. Her father had been a good man, a soft spoken, quiet man, but he had ruled with dignity, honesty and fairness. The people had loved him as much as they had loved her mother.


Jarina waved away the nobles from the throne room as memories of her parents flooded her. She sank onto her throne and rested her head in her hands. How she missed her parents. They had been loving and supportive. Since the day of her birth, her parents had tutored and readied her for her role as queen of Hesione.


She was ready to be queen, and she knew she could rule as well as her parents. If her uncle wasn’t around to stir up the nobles and make them think she wasn’t a capable queen.


“As if marriage to some pompass man would stop this infernal war,” she grumbled to herself.


She still couldn’t believe Ampyx wanted her to marry the king of Pereth, the very man who had started the war that took her parents.