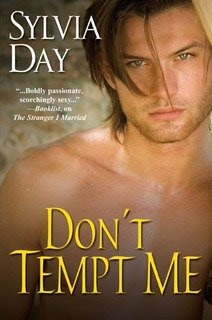 Now if this isn't a hot and steamy cover if I ever saw one.

Just may have to pick up two copies so I don't ruin the one (drooling) all over it. LOL

Don't Tempt Me by Sylvia Day
WHO IS SHE?
Simon Quinn can have any woman he wants, but he prefers them jaded, worldly, and free of illusions. His life is one of danger and temporary pleasures. An Irish commoner, he has nothing more than his expertise as a lover and mercenary to recommend him and no title, property, or family to redeem him.
Lysette Rousseau is a deadly beauty who can seduce or betray with equal skill. She should be just the sort of woman Simon entertains, but something about her sets him on edge. At times she is a femme fatale he cannot abide, at others she is warm, sweet, and irresistibly alluring. His reactions to both sides of her are equally powerful, but for opposite reasons. It seems almost as if there are two women in one…
TWINS!
…one wounded and exploited, the other innocent but strong. Lynette Rousseau will do anything to reclaim the sister who doesn’t remember her. She will gain the proficiency required to enter the underworld her sibling occupies. But how will she defend herself against the enigmatic, seductive Simon Quinn? A man who can liberate Lysette, but whose insatiable desires may ensnare Lynette forever…
Sylvia Day