Today you are all in for a treat as the lovely Ms. Elizabeth Hoyt is here to chat.
Her latest book To Taste Temptation, which is the first book in the Legend of the Four Soldiers series is coming out May 2008 but you can pre-order it right now.


ELIZABETH HOYT ANSWERS THE QUESTION ? WHERE DO ALL YOUR IDEAS COME FROM?? SORT OF


I was at a conference this last weekend and got asked the perennial author question, ? Where do all your ideas come from?? Authors have a tendency to either stare blankly at this question or laugh. The fact is, most of us have way too many ideas, but asking where they come from is like asking where the wind comes from. It?s just there, you know? (And yes, I know there's a scientific explanation for winds and how they start, but if you want to read about science today, go look at the Smithsonian website or something. Sheesh.) Anyway. So, usually there? Is just no answer to ? Where do all your ideas come from?? But, oddly enough, with my upcoming May release, To Taste Temptation, there is. I was watching The Last of the Mohicans a while back and had an interesting thought. What if a Colonial gentleman like Hawkeye (Daniel Day-Lewis? character in The Last of the Mohicans) came to Georgian London? A raw gentleman. A gentleman used to more savage and direct ways of doing things. A gentleman wearing Indian leggings. And what if that same Colonial gentleman should meet a refined and elegant English lady who vastly disapproved of ill-mannered Colonials and their leggings?What then?That single thought led to writing To Taste Temptation which is the first in a four-book series, The Legend of the Four Soldiers. I hope you enjoy them all! Cheers! 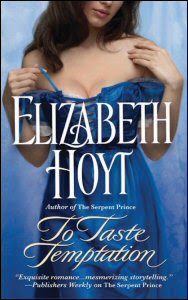 Isn't this one of the most beautiful covers you have ever seen?

Here's a little summary of what the book is about. Enjoy


EVEN THE MOST REFINED LADY
Lady Emeline Gordon is the model of sophistication in London's elite social circles, always fashionable and flawlessly appropriate. As such, she is the perfect chaperone for Rebecca, the young sister of a successful Boston businessman and former Colonial soldier.

CRAVES AN UNTAMED MAN
Samuel Hartley may be wealthy, but his manners are as uncivilized as the American wilderness he was raised in. Who wears moccasins to a grand ball? His arrogant disregard for propriety infuriates Emeline, even as his boldness excites her.

TO RELEASE HER PASSION...
But beneath Samuel's rakish manner, he is haunted by tragedy. He has come to London to settle a score, not to fall in love. And as desperately as Emeline longs to feel this shameless man's hands upon her, to taste those same lips he uses to tease her, she must restrain herself. She is not free. But some things are beyond a lady's control...


And as if reading how Elizabeth comes up with her ideas and the summary wasn't enough to convince you to order your copy of the book. Than hopefully reading this excerpt will!

Emeline frowned at Mr. Hartley. "What are you doing here?"He raised his eyebrows and stepped so close his breath brushed her cheek. "Why do you care?""Care?"

She opened her mouth, closed it, and then opened it again. "It isn't that I care, it's simply--""You're in a bad mood." He pursed his lips and tilted his head as if he were examining a suspect piece of fruit. "You're often in a bad mood.""That's not true.""You were in a bad mood yesterday.

""But--""You were in a bad mood when first I met you at Mrs. Conrad's salon.""I was not--""And while your mood was not precisely bad when we came to tea, it certainly could not be termed good." He smiled kindly at her. "But perhaps I have the case wrong. Perhaps you?re usually a lady with a sunny disposition and it's only my advent into your life that has turned you sour."

She gaped at him--actually gaped, her mouth hanging ajar like the greenest debutant. How dare he? No one spoke to her in this manner! He had turned away now and was idly plinking the harpsichord in a most annoying manner. She caught him glancing slyly at her, his mouth curving at the corner.

"And while your mood was not precisely bad when we came to tea, it certainly could not be termed good." He smiled kindly at her. "But perhaps I have the case wrong. Perhaps you're usually a lady with a sunny disposition and it's only my advent into your life that has turned you sour."She gaped at him--actually gaped, her mouth hanging ajar like the greenest debutant.

How dare he? No one spoke to her in this manner! He had turned away now and was idly plinking the harpsichord in a most annoying manner. She caught him glancing slyly at her, his mouth curving at the corner.

Emeline twitched her skirts straight. She hadn't been the belle of innumerable balls for nothing."I hadn't realized my voice was so sharp, Mr. Hartley," she said. She kept her eyes downcast and worked to look woebegone--not a very familiar expression. "Had I known the distress my unladylike surliness would cause you, I would have died a thousand deaths rather than acted so. Please accept my apology."She waited. It was his turn. Now he would be covered in shame because he?d made a lady apologize so abjectly. Perhaps he would even stutter.

She tried not to smirk.Instead there was only silence. His long fingers played on the harpsichord keys without any notion of music. If he continued much longer she would go mad.Finally, she looked up.Mr. Hartley wasn't even paying attention to his hands. Instead he was watching her with a faintly amused expression. "When was the last time you apologized to a man?"

Ooo! He was the most provoking oaf!"I don't know," she said sadly. "Years, perhaps." She stepped closer and placed her hand on the keys beside his. Then she looked up at him and slowly let her mouth curve into a very small smile. "But I do know he was most satisfied with my apology."

His hands stilled, the room suddenly hushed. His eyes were intent in an almost frightening way. For the life of her, Emeline could not look away from him. She watched as his gaze drifted over her face, coming finally to rest on her mouth. Without even thinking, her lips parted. His eyes narrowed and he took a step toward her, closing the space between them.

Well I hope you all enjoyed today. Now go order your copy. I want to thank Elizabeth Hoyt for stopping by. It was fun.

For all you who commented today. You are entered to win a copy of The Serpent Prince by Elizabeth Hoyt. She graciously offered this prize. I will pick a winner and email you on how to claim your prize.

Thanks for stopping by my blog and come back soon.

Linda said…
NOT SO FAST! I love your idea about the rustic American engaging a London lady. I've enjoyed every other book you've written so I'm getting this one too.

In another blog you mentioned you give each main character a little something unique (like Harry's wooden carvings). Would you care to share about Emeline and Samuel?
April 11, 2008 at 12:56 PM

Anonymous said…
LOL - the rest of us are slow getting here. Guess it's been a rough week on everyone. Maybe by Monday, I'll get to places on time.

As to your question, Sam has a rather unusual habit/hobby for Georgian England: he likes to run to clear his head and to think. Also, I think he likes the physical exercise.

Emeline's interest isn't explicitly stated in TO TASTE TEMPTATION, but I picture her as someone who knows all the obscure rules of society.
April 11, 2008 at 6:58 PM