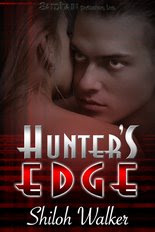 Here's a book for all you vampire lovers. Plus check out my Extra, Extra on the right hand side above the calendar for cool upcoming events!. Thanks

Some love can last a lifetime—their love was destined to last longer.


Angel’s first words to Kel were I’m going to marry you. She was seven at the time. He was eight. And he didn’t laugh when she spoke the words. Best friends as children, lovers as young adults, they had an unexplainable bond. Their future looked set. Until the night they were attacked by a creature that couldn’t exist.


Angel survived the attack—barely. But Kel didn’t. Or at least, nobody thought he did. His body was never found and Angel’s life would never be the same.


The attack might not have killed Kel’s body, but it sure as hell killed his heart. Twelve years later, there’s one part of his former life that he can’t move past. Angel. He can’t let her go, but he can’t have her either. She doesn’t even realize he is still alive.


But when a threat surfaces, Kel’s willing to do whatever it takes to protect Angel. Even if it drives them both to the edge of insanity and back.
Shiloh Walker

Anonymous said…
I'm not sure how I feel about this subgenre. I haven't always loved every book that I've read. I do have some favorite authors though.
April 23, 2008 at 5:00 AM