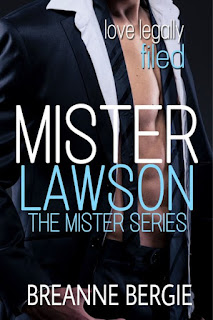 A ruthless boss. A giving heart. One love they never saw coming. Caretaker Gemma lands the job she needs. Working as an assistant at Lawson’s Legal. But her boss isn’t stunning on the inside, he’s cut throat and cold. Billionaire Drake Lawson is a lawyer. He’s the best there is and everyone knows it. But he has a heartbreaking past that lures her in and she can’t escape. Gemma finds a hidden side to Drake that nobody sees. One she wishes to unravel with an attraction unfolding. But there’s a secret he’s hiding. Can she guide Mr. Drake Lawson to find love again?

Mister Lawson is the second offering in the Mister series. Typically billionaire stories are not really one of my favorite troupes but I have to tell you that Breanne serves it up just right with her billionaire series. Mister Lawson aka Drake can call me anytime.

None of the men are arrogant towards the women that come into their lives. Yet, they can be controlling behind the bedroom doors. Which in turn makes for some really hot sex scenes. Although, the women do have their say as well. The sexual tension between Gemma and Drake was so tight, you could cut it with a knife. It just kept building like a fire until the climax. Everytime I did not think Drake would win me over, he would melt my heart again and again. The bonus epilogue is much appreciated and needed. After reading it, I needed a cigarette.