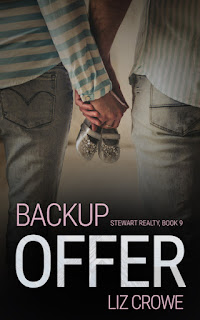 An ex-boyfriend, his massive dog, her house, and no hotel room in sight. What could go wrong?

After Blair ended things with Brandis, she was determined to get away—and stay away from him for good. She put family, friends, and the life she knew in Michigan in her rear view mirror and started over. As owner and head chef of her own place in Louisville, she stays plenty busy, especially since “Blair’s Kitchen” is the darling of the restaurant scene. She’s managed to avoid Michigan for almost a decade, but when her best friend needs her help, she drops everything and heads home.

Brandis has spent the last ten years coming to terms with addiction, personal tragedy, and the loss of the woman he loved. He’s now the third generation to run his family’s construction business, and he’s managed to reconstruct tattered relationships with his family. He’s even adopted a dog, thanks to some donated renovation time spent at an animal shelter. He’s got everything he needs—except a for one thing.

When the contractor she paid to build her restaurant’s expansion vanishes, leaving her with a giant mess, Blair only hesitates a moment before calling Brandis for help. But when he rushes to her side to evaluate the crisis, there isn’t an available room in a twenty mile radius. So they settle in to a routine—her, her one-time boyfriend, and his giant, slobbering dog in her small house. It doesn’t take long for the temptation of close proximity to give way, and while Blair tries to keep it all physical, Brandis has other ideas.

The end of the Stewart Realty saga brings the second generation full-circle in ways many never expected, but no one regrets.

I did not know this was the final book in this series. I have not read any of the prior novels. However, it did not take away from my reading experience. In fact, I would go back and read the prior novels to get to know the various characters better.

You could tell there was past history and hurt between Brandis and Blair as their interactions with one another was cordial and not much romance happening right away. The romance between Blair and Brandis was more of a slow burning one. It was not until the last like third of the story where Blair and Brandis finally hooked up. I found this book to be a sweet, nice read.