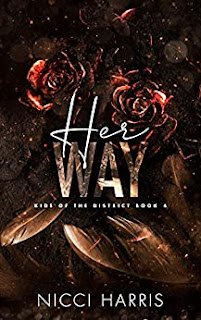 Bronson:
Olive skin. Amber eyes. She has been mine since we were fourteen.
She was my beautiful distraction from the chaos I was born into.
From the disturbances in my own mind.
From my legacy.
So when everything we created together is ripped away, I burn the idea of a peaceful life. Widening my arms to my inevitable fate, I accept my duties.
Without her, I embrace a single purpose.
To protect my brothers.
To protect my family.

Shoshanna:
Green-blue eyes. A dimpled grin. The world was a mere playground to my nutcase, Bronson Butcher.
But I destroyed him.
So he walked away from me, dragging behind him one half of my severed heart.
Eleven years later, the crazy son of a bitch appears, bleeding out on my hospital table.
A bullet wound. Of course.
We have both changed so much.
Bronson now lives by a deranged and bloody moral code. And he takes whatever he wants. . .
Whomever he wants.

Her Way is book three in the Kids of The District Series. It is best that you read The Duet - Our thing & Cosa Nostra before this book. Her Way has a HEA. And it features a possessive and dirty-talking hero who may be a little crazy, as well as a fiery and determined heroine. Both main characters are possessive, jealous, and fight for each other. It is a love story first. Word steam second. Violence, gore, and drama, third. Enjoy.

Nicci does it again with this newest book in the Kids of The District series. I thought Max was my favorite but sorry not sorry. Bronson is my new favorite Butcher brother. He has this rough but rareness about him that draws me to him. He and Shoshanna are the perfect match. To semi quote Megan Fox "Bronson and Shoshanna are twin flames. From the first moment that they met; they were meant for one another.

The sexual chemistry these two shared is off the charts. I was loving every moment of this book. I could not read it fast enough. Once I started, I literally could not stop. My heart was breaking over and over again with these two. Shoshanna is a fiery firecracker. She knew just how to push Bronson's buttons. Yet, looking into Bronson's eyes had her melting under his touch.

Warning: You may need to have a cardiologist on speed dial; as your heart will be ripped apart and slowly pieced back together while reading Her Way by Nicci Harris. 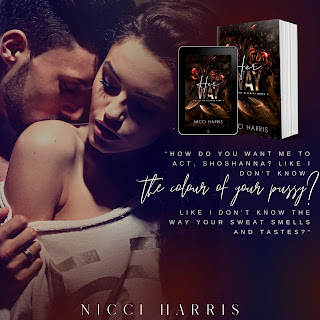