Trial by Fire: A Devastating Tragedy 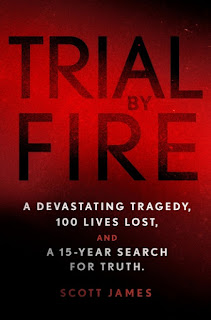 In only 90 seconds, a fire in Rhode Island's Station nightclub killed 100 people and injured hundreds more after the sparklers used by the hair metal band, Great White, ignited the acoustical foam lining used in the nightclub. But who was at fault?Within 24 hours the Rhode Island governor and the local police chief were calling for criminal charges, although the investigation had barely begun. Though many parties could be held responsible, fingers pointed quickly at the two brothers who owned the club.

James investigates all the central figures, including the band's manager and lead singer, the fire inspector, the maker of the acoustical foam, as well as the brothers. Drawing on firsthand accounts, interviews with many involved, and court documents, James explores the rush to judgment about what happened that left the victims and their families, whose stories he also tells, desperate for justice.

Trial By Fire is truly a heart-wrenching story about one of the deadliest fires in American history--one that was horrifyingly captured on video. This tragic event is definitely one that will haunt you for some time to come.
My Review
I briefly remember hearing about this tragic event. It is very unfortunate that all these innocent lives were lost for some cool pyrotechnics. I can't even believe to really imagine what the survivors or rescuers endured through this whole ordeal. Although, in a way I kind of did have an idea by reading this book.
It is amazing when you think of the other music acts or events where pyrotechnics are still used. While, the safety code of buildings or arenas have improved, this does not mean that there is not still a risk.  As with the Station fire; it was a combination of pyrotechnics, bad building code, and all around human disregard for safety rules. All it took was ninety seconds for hundreds of lives to be lost or injured in other words a flashover.
Taken from Wiki:
A flashover is the near-simultaneous ignition of most of the directly exposed combustible material in an enclosed area. When certain organic materials are heated, they undergo thermal decomposition and release flammable gases. Flashover occurs when the majority of the exposed surfaces in a space are heated to their autoignition temperature and emit flammable gases (see also flash point). Flashover normally occurs at 500 °C (932 °F) or 590 °C (1,100 °F) for ordinary combustibles and an incident heat flux at floor level of 20 kilowatts per square metre (2.5 hp/sq ft).
An example of flashover is the ignition of a piece of furniture in a domestic room. The fire involving the initial piece of furniture can produce a layer of hot smoke, which spreads across the ceiling in the room. The hot buoyant smoke layer grows in depth, as it is bounded by the walls of the room. The radiated heat from this layer heats the surfaces of the directly exposed combustible materials in the room, causing them to give off flammable gases, via pyrolysis. When the temperatures of the evolved gases becomes high enough, these gases will ignite throughout their extent.
You can read the Wiki page here.
Scott James