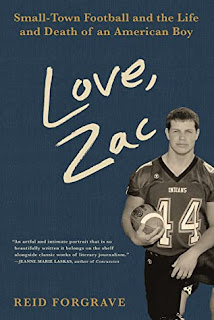 Zac Easter could be your neighbor, your classmate, your son.In December 2015, Zac Easter, a twenty-four-year-old from small-town Iowa, decided to take his own life rather than continue his losing battle against the traumatic brain injuries he had sustained as a no-holds-barred high school football player.For this deeply reported and powerfully moving true story, award-winning writer Reid Forgrave was given access to Zac’s own diaries and was able to speak with Zac’s family, friends, and coaches. He explores Zac’s tight-knit, football-obsessed Midwestern community; he interviews leading brain scientists, psychologists, and sports historians; and he takes a deep dive into the triumphs and sins of the sports entertainment industry.Forgrave shows us how football mirrors America, from the fighting spirit the game has helped inscribe in our national character to the side effects of the traditional notions of manhood that it affirms. But above all, Love, Zac is a warning to parents and those entrusted with the care of our kids not to ignore concussions and warning signs of CTE (chronic traumatic encephalopathy). For parents struggling to decide whether to allow their kids to play football, this eye-opening, heart-wrenching, and ultimately inspiring story may be one of the most important books they will read.

This book will make you sad. Yet, at the same time it is enlightening as it shines a focus on mental health and how it relates to football. Which is what Zac wanted. Will Smith helped with this in the movie, Concussion.

Mr. Forgave does a great job of portraying Zac's words on paper. It was like Zac was narrating the book for me. I am sure the Easter family wishes they could turn back time. Sadly, this can't happen but people can learn from Zac's story and help others suffering.

I know my oldest nephew played football as a freshman in high school. He did suffer a mild concussion and the doctor would not clear him until he was healed and he had to watch the movie, Concussion; so that he had an understanding. It did help as as mixture of the doctor's order and losing interest like young teens do; he is not playing football. This book is not just a "book" but an educational and emotional journey.

This quote from the book kind of summaries up football perfectly.