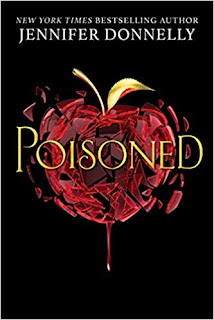 Once upon a time, a girl named Sophie rode into the forest with the queen's huntsman. Her lips were the color of ripe cherries, her skin as soft as new-fallen snow, her hair as dark as midnight. When they stopped to rest, the huntsman took out his knife . . . and took Sophie's heart.It shouldn't have come as a surprise. Sophie had heard the rumors, the whispers. They said she was too kind and foolish to rule -- a waste of a princess. A disaster of a future queen. And Sophie believed them. She believed everything she'd heard about herself, the poisonous words people use to keep girls like Sophie from becoming too powerful, too strong . . .With the help of seven mysterious strangers, Sophie manages to survive. But when she realizes that the jealous queen might not be to blame, Sophie must find the courage to face an even more terrifying enemy, proving that even the darkest magic can't extinguish the fire burning inside every girl, and that kindness is the ultimate form of strength.

I am really enjoying these modern retelling of classic fairy tales by Jennifer Donnelly. These are not the fairy tales that you grew up with. They are "darker" and even a bit gothic. However, in the case of this book, there was a little bit of a steampunk vibe that I was getting that I loved.

Don't call Sophie "too sweet" or "too nice". She may have started out that way but by the end of the story, she had become a fierce warrior. There is some romance but it is not the main focal point in this book. Which I thoroughly enjoyed as I felt like romance was not really needed.

There was enough differences in this book to keep me from making comparisons with the original story. This is a good thing. Poisoned is not a "remake" but a "remix". In this case the "remix" is just as good as the original. I look forward to the next book by this author.