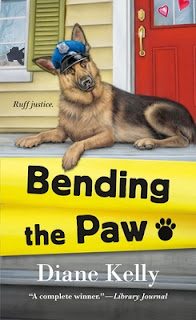 Make way for the long paw of the law as police officer Megan Luz and her K-9 partner Brigit investigate a baffling new mystery in Bending the Paw, by Diane Kelly.

A MURDER WITHOUT A BODY IS LIKE A DOG WITHOUT A BONE
A bloodbath is a shocking new challenge for Megan and Brigit when Detective Audrey Jackson calls them to the scene of what could only be a brutal murder. But the one thing the nightmarish scene is missing is a victim. The frantic homeowner’s husband is gone, seemingly without a trace―and so is the money he was holding. Has a vicious killer committed what might just be the perfect crime?Meanwhile, it’s hailing cats and dogs all over Fort Worth, and roofing contractors have descended on the city in droves. With plenty of damage and continuing storms, work delays are building up like so much runoff, but Megan is suspicious that one roofer may be a scam artist. Determined to leash every lawbreaker she and her K-9 partner find, Megan is building a case for prosecution, all while Brigit has her nose to the ground for a murderer…

Fans of cozy mystery books will enjoy this latest offering from author, Diane Kelly. Bending the Paw is the ninth book in this series. Which  you can read these books as stand alone novels. I must admit that when I heard the title of this book by first instinct was to think if Game of Thornes. Maybe a little tongue in cheek reference to GOT with the title of this book.

Brigit is a huge part of what makes this series. She is an important part of these books. She is not just Megan's side kick but her partner. I enjoyed Brigit's voice though out the book but wished that her parts were a bit longer. Another aspect of this book that I liked was the "killer's voice. It kept the killer engaged as a character in this book and added to the intensity of the overall story. Fans of this series will not be disappointed with this book. I know if my dogs could speak they would give it two paws up as a recommendation.