Come inside a Thug's Life I am pleasured to present author, Darrell King. He is going to share what motivatd him to write.

I first began my interest in writing street literature during the late 80's and early 90's when I was in my early twenties. 2Pac, Biggie and N.W.A. were in constant rotation in the cassette deck of my old 1981 Toyota Corolla. I especially liked "All eyez on me"(2Pac),"NotoriousThugz"(Bone,Thugz, & Harmoney Feat. The Notorious BIG) and "Boyz in thehood"(N.W.A.) These gangsta classics blend well with my environment that I lived in at the time.

I resided in Landover, Maryland's hostile” Dodge Park" apartment complex. A most turbulent area where nightly shootouts over drug turf, violent domestic squabbles and armed robbery was the order of the day. It was 1990, and back then the novels of ChesterHimes, Iceberg Slim, and Donald Goines littered the top of my mattress and hardwood floor of the bedroom in the modest little two bedroom apartment which I called home. I could barely keep up with the various titles because friends of mine would always borrow them with only a select few returning my beloved street collection to me. During this time I'd often travel back down to South Carolina, in order to visit with family and old childhood friends on the weekends. My first cousin Ernie would always show me a great time. He was that area's biggest dealer and it was he who inspired my lead character Marion "Snookey" Lake from my novels "Dirty South" and "Mo' Dirty:Still Stuntin'. 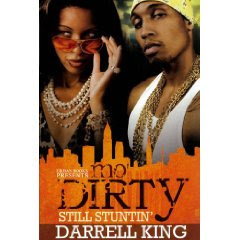 A major Cocaine distributor, it was nothing for him to own no less than ten high end vehicles at a time on his sprawling property. Pit bull terriers barked fiercely from behind a large wooden gate out behind his huge double wide trailer, while assault weapons and hefty bags of Colombian coke sat among half eaten boxes of Chinese carry-out on the kitchen table. Mean while a slew of assorted cousins and neighborhood friends would saunter in, take their seat at the table and begin the tedious task of dividing, cutting, weighing and bagging the powder for street sales. Cooking up the remaining cocaine to be sold as crack to the less wealthy customers of the wealthy Hilton Head Island neighborhoods. I'd never before seen a human being murdered until one hot, mid-July night in 1990.

A drunken local stood on a dirt road corner arguing with a female dealer over a transaction gone sour, when all of a sudden two loud shots rang out and I witnessed the man's head literally explode in a sickening shower of red. His blood and dura matter splattered over everything near it, including several other dope fiends who stood in line behind him trying to cop a fix. As for me...I was petrified with fear. I couldn't move a muscle. It was as if my shoes were stuck in cement. People began screaming and running all around past me. Some stumbled to the ground and were trampled by others who fled the scene. The gunman had to be no older than maybe 12 or 13. He was a handsome youth who wore his hair in corn rows and had an almost angelic like face. A white wife beater clung tightly upon his thickset torso."S'up Dee?!

You tryin' ta get da shoes off dis cat's feet? you know them's da new Jordan's right?" He said smiling calmly at me with a mouth full of gold teeth. I stood speechless. So he shrugged his shoulders and immediately went about the business of removing the expensive sneakers off of the dead man's feet. He then smiled back at me and calmly walked over to an awaiting late model Monte Carlo with his spoils and got inside along with a group of about five or six other boisterously loud teens. The car squealed away leaving me in its dust. He knew who I was. For I had lived among the Gullah community for most of my childhood, and I too was one of them and though we now lived totally different lives they still treated me warmly, unlike they did each other.

I just stood looking at the dead crack fiend who'd just gotten his brains blown all over the sidewalk, until one of my cousins whisked me away from that strip. When I returned to DC I was so very shaken by that scene that I consulted the diley counsel of a local Baptist pastor. Later that same month I was informed through a long distance phone conversation that the young man who'd pulled the trigger on that humid night, had recently met the same bloody fate. I attended his memorial service down south, and was surprised to see the large numbers of gang members who crowded the little country church with their scowling presence. It was these series of events that made me think deeply on the grim issues of life and death in the hood that became the foundation for my novel's dark and gritty plots. To me the dynamics of most youth street gangs are basically the same.

Older gang members usually show off their spoils of their ill-gotten wealth through displays of fancy jewelry, large wads of cash, flashy cars and designer apparel not to mention the attention of desirable young women. All these things attract young, poor and naive teen boys to affiliate themselves with neighborhood gangs and drug dealers. Street lit, like its musical sibling Hip Hop, expose the cold, harsh reality of this world to its respective audiences. However, few if any readers of the Urban lit genre have ever heard of these hardcore tales told with a Gullah/Geechee flavored twist the likes of which you'd find in either "Dirty South”, or "Mo'Dirty:Still Stuntin'". Which makes for an interesting change from the norm. The street gangs of the deep south in general and those in the low country regions of South Carolina and Georgia in particular had origins during the’ Roaring Twenties’ when prohibition caused many poor share croppers to seek supplement to their meager incomes via the manufacture, distribution and sale of illegal alcohol better known as "bootlegging".

Sea Islanders off the coast of South Carolina and Georgia were bold rum-runners who were skilled at producing their booze or "moonshine’ during the late night hours. Many times literally working their stills by the light of a full moon as campfires or flashlights would invite trouble by way of the local authorities or "revenuers" who'd not only arrest the bootleggers but destroy their homemade liquor stills as well. To counteract this as well as competition from other rum-runners and bootleggers. Many blacks as well as poor whites began forming armed militias. These early gangs were made up of teens and young men mostly in their twenties who'd protect their illegal interests by any means necessary. Thus began the birth of southern youth gangs. As the 1920's and prohibition came to a close.

The 1930's and the Great Depression brought about a new wave of thugs. The bold and shocking news headlines of the day covering the exploits of the infamous John Dillinger,Bonnie & Clyde and Babyface Nelson to name but a few during what would go down in history as the” Midwestern Crime Spree" inspired many an impoverished youth to take up arms and begin a fledgling criminal career of their own. All these examples of youth gang participation including the popular culture references to gang activity such as the novel "RumbleFish"(1975,S.E.Hinton),and movies such as 1979's "The Warriors" (from Sol Yurick's 1965 novel),and 1988's "Colors" have inspired me to pen the novels "Dirty South" and "Mo'Dirty:Still Stuntin'" as a study in urban criminal culture.

I want to thank Tracee for letting me host Darrell King.

thewriterslife said…
Sounds like a fun book! Thank you for hosting Darrell, Cheryl!
November 3, 2008 at 8:55 AM

Anonymous said…
Thank you so much for giving me an opportunity to be a guest on the 'Book Nook',Cheryl! I'm greatful! Thanks Darrell King
November 10, 2008 at 10:19 PM