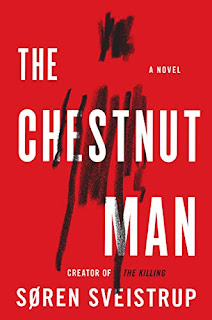 IF YOU FIND ONE, HE’S ALREADY FOUND YOU
A psychopath is terrorizing Copenhagen.
His calling card is a “chestnut man”―a handmade doll made of matchsticks and two chestnuts―which he leaves at each bloody crime scene.
Examining the dolls, forensics makes a shocking discovery―a fingerprint belonging to a young girl, a government minister’s daughter who had been kidnapped and murdered a year ago.
A tragic coincidence―or something more twisted?
To save innocent lives, a pair of detectives must put aside their differences to piece together the Chestnut Man’s gruesome clues.
Because it’s clear that the madman is on a mission that is far from over.
And no one is safe. 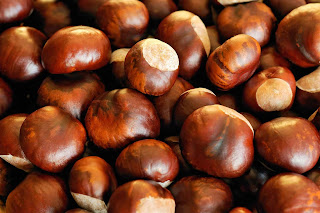 My Review
I was drawn to this book by both the premise of the story and the cover. Also, I am a fan of the television show, The Killing. I have the book but have not read it yet.
Ok, so the killer's calling card of leaving little chestnut dolls at every crime scene does send chills down your spine. Than, when the police figure out the motive of what the killer was up to, that is where things got really interesting.
Yet, as much as I was drawn to this story I found the characters to be a bit "wooden". I thought this was a good story but lacking in character development. There wasn't really anything intriguing about the police. What made the Killing television show great was the characters, Sarah Linden and Stephen Holder. They were both flawed which made them relatable while at the same time they were smart in solving cases. That is what I mean by the character development lacking in this book.

SavingsInSeconds said…
I watched The Killing but didn't really like it. After it ended, I was frustrated that I wasted all that time watching it. I wanted to see how it turned out, though.
November 22, 2019 at 8:01 PM