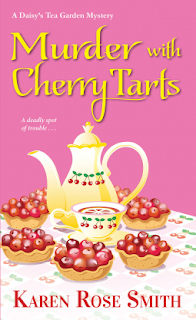 In Pennsylvania's Amish country, Daisy Swanson has a tea shop to run, a daughter to marry off--and a murder to solve . . . Daisy's worried one of her employees at Daisy's Tea Garden may be in a spot of trouble. Lately Karina's been loading up on soup and second-day baked goods at the end of her shift--and while the shop's scrumptious treats may be hard to resist, Daisy suspects there's more going on, especially since Karina has been seen hanging out in a rundown part of Willow Creek.Planning her own daughter's wedding is enough to keep her busy, but Daisy can't help feeling a protective maternal instinct--and an instinct to investigate. It turns out Karina has been helping a down-on-his luck single dad who's been making ends meet--barely--by selling antiques at a place called Pirated Treasures.But when an employee at the antiques store is bludgeoned to death with a marble rolling pin, Karina's new friend is suspect number one. Though the motives are muddy and steeped in intrigue, Daisy is more than determined to flush the real killer out.

This is a cute, cozy mystery read. I liked this book; despite having not read the prior novels in this series. Yet, this book can be read as a stand alone novel. Daisy is sweet. All of her treats sounded so yummy.

I would like to get to know the rest of the characters better. They seemed like people that I would want to hang out with. However, as much as I did find everyone enjoyable; there was a bit of a barrier where I felt like I was not able to fully embrace them as closely as I would have liked.

The overall story was fine. It seemed to move slowly with Daisy helping to solve the case. The last several chapters of the story is where it all came together and the pacing did pick up. Cozy mystery readers might want to check out this book.

Mystica said…
Most of the classic crime stories too are set at a slower pace but the overall story is always good.
November 18, 2019 at 8:19 PM