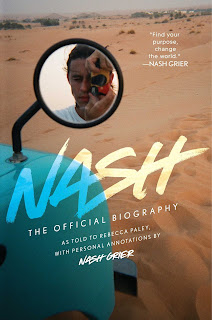 The first-ever book about Nash Grier, one of the biggest digital superstars in the world.
When he was still in high school, Nash Grier had no idea his life was about to change—forever. With the launch of the popular Vine app came the beginning of Nash’s career as a viral social media sensation. Now, in his official biography, the twenty-one-year-old digital media phenomenon shares never-before-told stories about life behind the camera. From growing up as a regular kid in North Carolina, to finding his calling as a top social media tastemaker, to landing leading roles in major feature films, to being a millennial ambassador for top brands, to using his platform to promote change, to leaning on the love and support from his fan base when the going gets tough, this is the story of a how Nash found his voice—and how readers can find their own.

Before this book, I had never heard of Nash Grier. I am not huge on social media. Yes, I have a Facebook, Twitter, and Instagram accounts but the only one I am actively working on gaining followers on is Instagram. It is not an easy process. However, if you score it just right, you can find yourself an overnight sensation like Nash.

I briefly heard of the app Vine but I never tried it. It appears that Nash comes from a well grounded family. That is what made me keep reading this book is how humble Nash came off and I have never even met him. After reading this book, I did go out and checked his Instagram account. It was nice to see that he and Taylor are still together.

Yet, as I was reading this book, it seemed a bit on the light side. I wanted to know a bit more about Nash's rise to fame. In addition, there were photos with Nash visiting different places and a humanitarian effort with clean water. I would have liked to have read more about these adventures. Although, readers who are familiar with Nash may really enjoy this book.


NASH GRIER is a twenty-one-year-old social media phenomenon with more than 25 million followers. Grier started his journey to worldwide celebrity by creating videos on the popular social media network Vine. From there, he has amassed huge followings on YouTube, Instagram, Twitter, Facebook, and Snapchat. As an actor, his credits include You Get Me, Air Bound, The Deleted, The Outfield, Scream, and Gnome Alone. Hailing from North Carolina, Grier now lives in Los Angeles. Visit @nashgrier on Instagram, Twitter, Facebook, and YouTube.


Rebecca Paley is the bestselling coauthor of memoirs by Leah Remini, Betty Halbreich, and more.