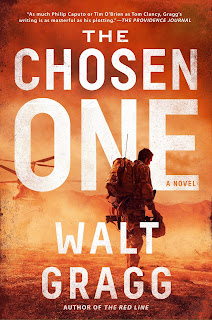 
– In 2017, former prosecutor and military veteran Walt Gragg exploded onto the literary scene with his stellar and award-winning debut The Red Line. Now, Gragg follows up his epic first novel with another intense military thriller, The Chosen One (Nov. 19, 2019, Berkley), and the stakes are even higher for the world as we know it.
The new leader of the Islamic world, the Mahdi — also known as the Chosen One — has risen up, rallying forces across the Middle East and driving them deep into Saudi Arabia and Egypt. Standing in the fundamentalists’ way are forces made up of mostly American troops lodging desperate warfare and fighting waves of missiles as the Mahdi continuously unrolls the tricks up his sleeve.
In the thick of it is Marine Lieutenant Sam Erickson, who’s fought with his company all the way from the Mediterranean to the outskirts of Cairo. Amongst the fighting, Sam now finds himself at the nexus of it all and asking himself a critical question: Can he make the sacrifices necessary for the greater good?
Like his first novel, Walt puts readers at the very core of the action in this fast-paced, tension-filled thriller — complete with dust, desert heat, and danger. My Review I am a fan of military themed books. This book makes a fan like me very happy. It is full of action, engaging characters, and a strong storyline.
I did not have a favorite character as I did like them all. It was like a movie playing in my head the whole time that I was reading this book. It felt like I was transported to the Middle East...running for my life while dodging bullets, surviving; while trying to capture the enemies.
There were times that I was on the edge of my seat while reading this book. The story really picked up towards the end. Speaking of the ending, it ended on a high note.
Warning: If you get offended easily, than, this book is not for you.

WALT GRAGG lives in the Austin, Texas, area with his wife, children, and grandchildren. He is a retired attorney and former Texas state prosecutor. Prior to law school, he spent a number of years in the military. His time with the Army involved many interesting assignments, including three years in the middle of the first Cold War serving at United States European Command headquarters in Germany. His first novel, the critically acclaimed The Red Line, was named the 2017 Best Book Award winner for best thriller/adventure novel and was a 2018 International Thriller Writers best first novel finalist.
Praise for Walt’s first novel, The Red Line:
“[An] impeccably researched, riveting first novel…Must reading for any military action fan. Nearly every page reeks of the smoke of battle and the stench of death.”
— Publishers Weekly STARRED review
“[An] intense and gripping debut thriller … Difficult reading, not for the writing, which is stellar, but owing to the story's timeliness and authenticity. Recommended for fans of military and futuristic thrillers.”
— Library Journal STARRED review
“You won’t read a thriller this year more perfectly timed than the scarily prescient THE RED LINE, the sterling debut from Walt Gragg that ‘imagines’ an all-too-plausible scenario for World War III. … As much Philip Caputo or Tim O'Brien as Tom Clancy, Gragg’s writing is as masterful as his plotting, and THE RED LINE has all the makings of a classic.”
—The Providence Journal
An Interview with
Walt Gragg
Geography doesn’t influence my books as much as history.  So the subject and location for each is based more on taking historical events and applying a “what if a similar event were to happen today” approach.  In the case of The Chosen One, I have always had a fascination with the “end of days” prophesies that have been a central part of religious beliefs throughout history. After searching through the various religions, Islam’s prediction of the rise of the Mahdi — the guided or chosen one — foretelling of his conquering the world and leading it through its final days was one that stood out as having a particularly interesting historical basis. It should be an insightful subject for many readers.
The writing in both books follows a similar pattern even if the stories are quite different.  Readers were clear that they loved the approach used in writing The Red Line, so we wanted to ensure they were both pleased and comfortable with how we presented The Chosen One. We have an entirely new set of what we are being told are extremely interesting characters, and an action-filled story and fascinating setting. Like The Red Line, The Chosen One is presented using four intertwining storylines occurring simultaneously, all involving what we hope readers find are exciting, relatable events.
Experience always helps. Every aspiring writer is told in the first minute of their initial writing workshop to write what they know, to write about what they are passionate. While I had been both a soldier and later a lawyer, I was far more passionate about writing military thrillers than legal ones. For me, there were many interesting assignments, including having served at United States European Command Headquarters in the middle of the First Cold War, which gave me an opportunity to participate in events and gather insight into what a war with Russia would look like. In The Chosen One, other assignments, including one with Special Forces, come to the forefront.
Hopefully, there is something here for everyone. The truly great thing about writing The Chosen One was the ability to examine two questions that should interest us all: How do we become who we become? How do we believe what we believe? The intent was not to write another simplistic bad versus good story that presents Islam in a stereotypical, simplistic, negative light. The desire here was to delve a bit deeper into the human psyche. The Mahdi is presented in a manner that makes him one of the most interesting and complex antagonists the reader will ever encounter.  And, of course, like The Red Line, The Chosen One’s goal is to lay bare war in a stark and realistic manner.
The influence of both politics and religion and their hold on people are certainly a central part of the story. For the Mahdi, there is no distinction between the two. In fact, in The Chosen One, the religious leaders he places within his military units are called “political officers.” The book is neither a condemnation of any particular political or religious system, nor an attempt to elevate them. It is more a look at how both our political and our religious beliefs guide our actions and decisions.

My Assignment Help Online said…
Thanks, it is helpful post. myassignmenthelp have been providing quality assignment help services from years of time and have assisted a number of students with specific needs and requirements. When it comes to providing social science assignment help services, we have the right specialist to help you with the different aspects related to the subject and also help you complete your assignment as per the given instructions of the university tutor.
September 15, 2021 at 5:55 AM