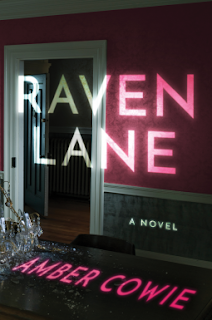 The truth can bring out the worst in the best of friends.
Esme and Benedict Werner have an idyllic life in a tight-knit community until an accident in their cul-de-sac ends in the tragic sudden death of one of their dearest neighbors. After vindicating eyewitness accounts morph into contradictory memories, suspicion, and unaccountable accusations, Benedict is arrested. Esme’s life, too, is changed forever.
As the neighborhood largely turns against her and her family, Esme has time to think about her past and what to do next. Then her fellow residents start looking deeper, questioning one another, and themselves, about hidden lies and betrayals.
Esme has more than her share of secrets. And the consequences of what happened on that fateful late-summer evening on Raven Lane are far from over. When the mask of civility slips, can friends and neighbors recover from seeing the monstrous truths beneath?


I liked this book. There were enough good things about it to keep me reading until the end. Although, I do wish that the "intensity" level was higher. The people of Raven Lane did have many secrets. They are not the "perfect" neighbors that they want you to think they are.

Example is Esme and Benedict. They may seem like they are a good couple but when Benedict is arrested for murder; their world comes crumbling down around them including their skeletons in the closet.

As the story progresses; the secrets are revealed. While, I did like this book and the characters were fine; as I stated before the "intensity" level is what I found lacking. There was not enough to make me "gasp" in shock. As you might expect from a thriller. As I got to know the neighbors, I really would not want to be their friends. The conclusion to this book was a bit of a letdown.


Amber Cowie is a graduate of the University of Victoria and was short-listed for the 2017 Whistler Independent Book Awards. She has also served burgers at a frontier-themed diner, hot chocolate at the only ski resort in Scotland, and pints at a bar in downtown Dublin. She planted trees in northern Canada and staffed the front desk of a hotel on a remote island between France and England. She has also been a reporter for a small-town newspaper, in-house writer for a snowmobile magazine, and freelance pattern designer for knitwear companies. Now she is a mother of two, wife of one, reader of many, and the author of the acclaimed debut novel Rapid Falls. She continues to write books that make her browser search history highly suspicious. For more information, visit her at www.ambercowie.com.

Michael Dep said…
Such a wonderful Blog. Thank You So Much for sharing this post. You may also visit my website Diplomacovers.net where you will find the best graduation products like Diploma Covers, Diploma Holders, Wholesale Diploma Covers, Custom Diploma Cover, Graduation Tassels online.