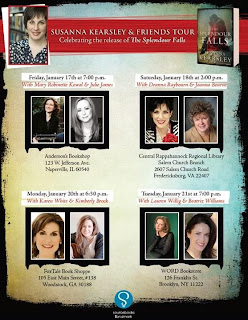 Linda said…
Wish I could attend one of these events. I love Susanna Kearsley's books. Thanks for the giveaway.
lcbrower40(at)gmail(dot)com
January 5, 2014 at 8:15 AM

Linda said…
Wish I could attend one of these events. I love Susanna Kearsley's books. Thanks for the giveaway.
lcbrower40(at)gmail(dot)com
January 5, 2014 at 8:15 AM

Mystica said…
I love her books. Sad that this is with restrictions but the book will eventually home itself to me!!! somehow miracles do happen in the book world.
January 6, 2014 at 3:28 AM

traveler said…
Thanks for this great giveaway. saubleb(at)gmail(dot)com
January 6, 2014 at 8:40 AM

petite said…
This would be memorable. Love this author's novels. Thanks for this chance. elliotbencan(at)hotmail(dot)com
January 6, 2014 at 8:43 AM