Someday My Prince with Come + Giveaway 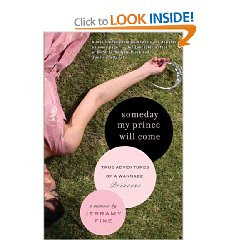 Jerramy Fine grew up believing in her heart that she was a princess and bound to marry Peter Mark Andrew Phillips. Peter is one of the grandsons of the Queen of England. Jerramy always believed that she was somehow switched at birth. I mean, what princess would want to live with a family who farmed, wore second hand clothing and expected her to deal. Jerramy couldn’t wait till the day came when the royal family would realize she was missing.

As Jerramy grew up; she was plotting how to make her way to England, especially hoping to catch the eye of Peter, her love. Jerramy begs her family to send her away to boarding school. This is uncommon, when most girls her age would not want to be sent away. Will Jerramy and Peter have a happy ending?

I had such a fun time reading this book. Jerramy’s accounts of her growing up with a hippie family in the middle of no where’s ville was hilarious. Even at such a young age, Jerramy knew exactly what she wanted and she was not afraid to pursue her goals. I will say goals and not dreams because to Jerramy…marrying a prince and being claimed as part of the royal family was a reality to her. I liked that Jerramy could poke fun at herself in this book. Someday My Prince will Come does not read like a memoir. The first word that comes to my mind when I think of memoirs is …boring. I can assure you that this memoir was fun, upbeat, and a pure delight to read. I hope that Jerramy writes another novel.


I am happy to be able to give away a copy of this book to one lucky reader. Must by a follower and Open to US and Canada only.

Share with me what you dreamed of being growing up.
Contest ends November 15th.
Jerramy Fine

Linda said…
My "when I grow up" dream was prety realistic - to be a teacher. I accomplished that, followed by being a school librarian - one of the very best jobs in the world. This book sounds neat. Hope I win it.

Ann Diana Dinh, said…
I wanted to become a teacher as I grew up but now, I'm hoping to be a psychologist.

Jenny N. said…
When I was little I always said that I would become a pharmacist because thats what my favourite auntie did.

Unknown said…
I always wanted to be a mommy since I loved playing with my dolls and helping take care of my younger sisters. Thanks for entering me into this giveaway.

annies home said…
sounds like a great book i love the title and I am a follower
shopannies@yahoo.com
November 3, 2009 at 7:36 PM

I am a follower

holdenj said…
This sounds like a great story, don't we all sometimes want a different life? Thanks for the chance to win! I'm a follower.
JHolden955(at)gmail(dot)com
November 4, 2009 at 3:04 PM

Marilu said…
I am a follower. I would love to read this. PLease enter me into the giveaway. tahnk you
lovemykidsandbooks AT gmail DOT com
November 5, 2009 at 11:10 PM

Carol M said…
I just wanted to get married and raise a family and that's what I did!

Winning Readings said…
I'd love to read this!

I am a follower! t
thanks for the chance to win this.
lovemykidsandbooks AT gmail DOT com
November 9, 2009 at 1:03 PM