Defenders of the Scroll: History, Legend and Lore 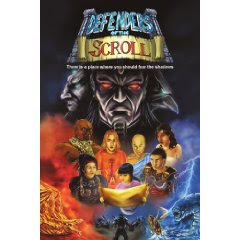 Far, far away is a magical place called Mythos. There lives a king by the name of Mornak. He is also the most powerful wizard. Many years ago, Mythos started getting run over by robbers, murders and thieves. Mornak had an obligation to his people to keep them safe. So he had a huge building built. It is called the Hall of Shadows. It resides in Darkwood or Shadow Wood. The Hall is a prison to keep all the evil. Things have been peaceful since the construction of the Hall.

Flash forward to the present. Something strange is happening in Shadow Wood. Mornak sensing that something horrible is about to happen, instructs his daughter, Dara to safe guard a scroll. Her father tells her that if he does not return that Dara is to open the scroll and read the writing on it. Something does happen and Dara calls upon the scroll. What happens next has Dara running for her life from the evil, Shadow Lord. Luckily, Dara won’t be alone. She is joined by a various group of interesting characters like Alex, Scorpius, Bantu, and Maya.

Defenders of the Scroll: History, Legend and Lore is a thrilling joyride of action, excitement, and adventure. Defenders of the Scroll: History, Legend and Lore is book one. I enjoyed every moment of this book. I found I lost myself in it. It was so good. I am definitely rooting for Dara, Alex and the rest of the Defenders. The characters are interesting and fully dimensional. Shiraz really set up this book and the history behind the storyline at the beginning really well. There are some pictures inserted throughout this book. The pictures helped tell the story. I hope they kick the Shadow Lord’s butt. I don’t usually get that excited over these types of books but I just can’t stop raving about it. I can’t wait to read book two.
Shiraz