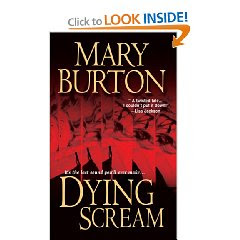 Women beware…There is a serial killer on the loose. So far three women have gone missing. There is the aspiring artist, high school senior and the stripper.

The authorities have a suspect on their radar. The issue is that this person is suppose to be dead. His name is Craig Thornton. He and his fiancé, Adrianna were to be married but a drunk driver crashed into them, causing Adrianna to lose her baby and sending Craig into a coma that he never woke up from. Now someone is leaving Adrianna a written message. It is signed by Craig.

Detective Gage Hudson latest case brings him to the doorstep of his former lover…Adrianna. He and Adrianna used to be a hot item. Detective Gage doesn’t believe Craig is alive but current evidence does have him starting to wonder. Gage will do anything to protect Adrianna, even if it means sacrificing his life.

Dying Scream is the third book I have read by this author. While I have enjoyed every book of Mary Burton’s thus far, I didn’t quite like this one as much. The plot wasn’t bad but it was the characters that I found lacking. I couldn’t find myself engaged in the characters. The relationship between Detective Gage and Adrianna was a gallant effort. I liked Gage. He made a good male lead. Adrianna got on my nerves. She seemed like she was better than everyone and when the time called for her to be strong, she wilted. Dying Scream didn’t leave with screaming for glee. Though, I do plan to check out Mary Burton’s next novel.
Mary Burton

Anonymous said…
Nice story you got here. I'd like to read more about this matter.
BTW check the design I've made myself Female escorts
November 17, 2009 at 5:39 AM

Anonymous said…
It is very interesting for me to read that article. Thanx for it. I like such topics and everything that is connected to this matter. I definitely want to read more soon.
November 18, 2009 at 1:31 PM