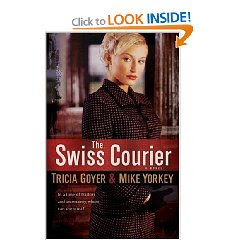 The year is 1944 in Germany. The Gestapo has recovered from the attempt on Hitler.

Joseph Engel is a German physicist. He has been tasked with the role of working on an atomic bomb. Joseph receives a shock. He learns that he was adopted and is really a Jew. Joseph decides to stop working on the bomb and flee Germany for safety to Switzerland.

Gabi Mueller is a Swiss-American. She works for the American Office of Strategic Services. If you asked Gabi what she thought of the war, she may not have much to say. She didn’t pay too much concern, till she was tasked with a important mission. She is asked to escort Mr. Engel out of Germany. This mission will not be a easy one. It will call on all of the strength Gabi can muster.

I have to admit that I was thoroughly amazed at how much I did enjoy this book. The characters were very well-developed. I wasn’t sure that Gabi could handle the task at hand as she was soft spoken. She surprised me in a good way. Kudos goes out to Joseph. Even after learning that he is Jewish, he could have stayed and helped the Germans but he decided to risk his life for freedom. The Swiss Courier is the first novel I have read by either of these authors. They did a good job together. I couldn’t tell when one person ended and the other continued. I plan to check out more books by both Tricia Goyer and Mike Yorkey.
Mike Yorkey Tricia Goyer

Anna said…
This sounds really good, and thanks to your review, I have another book on my to-read list. ;)

I hope it's okay that I linked to your review here.

Anonymous said…
Dear Author cherylsbooknook.blogspot.com !
Absolutely with you it agree. I think, what is it excellent idea.
December 18, 2009 at 11:42 PM

Tony Kemp said…
Specializing in immediate delivery.
you need a professional courier service that will treat your delivery as a priority.
Can check hot shot courier
February 27, 2010 at 12:52 AM