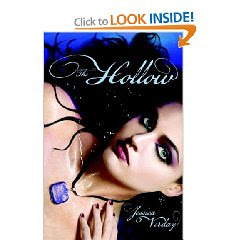 Abby has just lost her best friend, Kristen. It has been sixty-eight days since Kristen went missing. Rumors are swirling that Kristen killed herself. Abby doesn’t believe that. In fact, she still believes that Kristin is alive somewhere. Her parents are holding a funeral. Have you ever attended a funeral with no body? It is so weird.

Abby escapes down into the basement of Kristin’s house. When Kristin and Abby were little, they used to play down in the basement. They would pretend that there was a magical castle in the basement. To Abby’s surprise, she is not alone. A boy by the name of Caspian is also hiding in the basement. There is something different about Caspian. What could he possibly be hiding? Also, can Abby handle the truth about Kristen’s secret life?

Jessica Verday gives the tale of Sleepy Hollow, her own unique twist. I thought The Hollow was a good young adult novel. I did get into this book and the characters. I knew there was something different about Caspian but I didn’t quite expect the outcome that was presented in this story. At about four hundred and some odd pages, this book is actually a very quick read. I have to admit that I did not like how this book ended, though I understand why as it is helping to lead up to the next book that continues this story. I look forward to continuing the journey with Abby and Caspian.
Jessica Verday

Linda Jacobs said…
This sounds pretty interesting. That must be quite a cellar if they are able to hide down there with no one knowing.