October 06, 2008
I want to thank Valerie with Hachette Book Group for sending me this book to read. 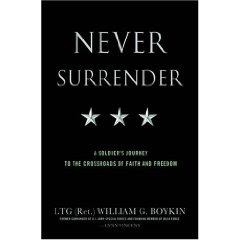 The one thing I really found amazing about Lieutenant General William G. Boykin was his unwavering dedication to his faith in God. I thought this fact really made Boykin a man of honor, respect, and of great character. There are not many non fiction novels that are so powerful in addition to leaving such a lasting memory as Never Surrender: A Soldier’s Journey to the Crossroads of Faith and Freedom. After reading this book you can’t help but feel proud to be an American. It’s people like Lieutenant General William G. Boykin who we have to give our thanks to for giving us our freedom to live out lives the way we want to and I have one comment to make and that is…We will Never Surrender!