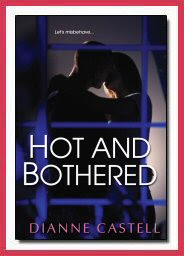 SAVANNAH WHEN IT SIZZLES

Savannah, Georgia: city of history, mystery, and ghosts as well as four best friends who have never fit in anywhere except with each other.
But everything is about to change as an unsolved murder from decades ago draws them close—and closer still—to four sexy bachelors with secrets of their own.
In Savannah, what you expect is never what you get...

FROM THE AUTHOR
Hi, Everyone!
One of the reasons I wrote Hot and Bothered is that I wanted to set a book in Savannah. Not only because I love Paula Deen, pralines, magnolias and am a Southern Belle at heart...yes, I do own a set of pearls and have my own deviled egg plate...but I love that Savannah is the most haunted city in the US! You can’t swing a ruffled parasol in Savannah without hitting something that has a ghost story connected to it. Every old restored building has strange noises, lights flashing, creeks and groans and stuff gone missing for no reason.

My daughter lives in Savannah in what was once an old Northern Aggression barracks (that’s the Civil War to you Yankees). When her sketching pencil goes missing she always finds it in the bottom of her duffle bag. Ghosts just loooove to play games.

Waiters at the Pirate House Restaurant where pirates actually hung out and did evil pirate things talk of deserts being flung across the room. At the Pink House Restaurant you can be shown to you table by James Habersham. That he died a hundred years ago is a bit unsettling.

Juliette Gordon Low has been seen on the porch tapping her foot if the visiting Girl Scouts are not out of her house at five o’clock sharp and Jim Williams of Midnight In The Garden of Good and Evil fame has been seem more than once at the Mercer House where he lived and died. And of course there are the Savannah doorways painted Haint blue to ward off evil spirits and the hour before midnight for doing good and the hour after for doing evil.

There is definitely something unusual going on in Savannah...or not?

Do you believe in ghosts? Have superstitions?Do you have a lucky shirt? Hat? How many baseball players never step on the base line when taking the field or never shave before a game?
My house in Cincy is haunted. Too many things going bump in the night...and day...and shadowy figures at the window.

So, what about you? Do you have a ghost story for me? A favorite superstition? Or do you think it’s all bunk? I’ll give away a Hot and Bothered T-shirt from your emails to me at: http://us.f431.mail.yahoo.com/ym/Compose?To=DianneCastell@hotmail.com Please put Access Romance in the subject line.

Park Avenue Princess said…
Oh Cheryl, this one has to go on my list of wants : )

It sounds great! I love your blog! Thank you for coming by mine. You always leave the best comments! I'm going to have to make a list of sites on my blog...