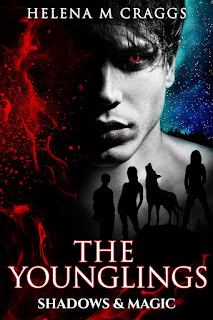 Humans have no idea what lurks in the shadows.

Mortals don’t expect to see supernaturals. Their minds rarely consider the possibility, even when it’s staring them right in the face. I was one such person … until I met my estranged father.

Let me introduce myself. The name is Carter. Quinn Carter. A witty, laid-back, regular guy, who just happens to be half-demon.

Finding out Dad is a demon king was like a sucker punch to the gut. Seriously, I’m a total biological freak. Meeting him was the catalyst for my life tail-spinning into a new world—a world where things of legend are real.

The one positive about this whole situation is the friends I have made. Good friends. But they too have secrets … big secrets. They’re not exactly your average individuals. Turns out demons aren’t the only paranormal creatures out there.

I also need to mention a Vampire Ministry, evil stab-worthy demons, and troubled spirits stranded on the spectral plane. As a consequence, life for my friends and me became a tad problematic.

Being heroes in the mortal realm hadn’t been on anybody’s to-do list, but we had no choice in the matter, and things were about to get very interesting.

One day Quinn is typical teenager and the next he finds out he has supernatural powers. Luckily, he has Mrs. D to help guide him along the way. While, Quinn tries to navigate his way through this new world, he is joined by his friend and love interest Eve.

It felt like the first third of this book was spent on Quinn and him learning about his heritage and how to use his abilities. Which. I liked but felt like it did go on a bit too long. The middle of the book is where the story picked up and felt like it was moving along.

To be honest, I could have done without the romance. I think the story still would have been just as good without it. I did like all of the characters. They were unique in their own way but did act their ages as teenagers.

This is a good ya book that the ya readers will like. If you do like to read fantasy books then you might check out this one. I do look forward to seeing how this story plays out with Quinn, Eve, and the rest of the gang as they battle the Ministry of Vampires.

Author Bio
I live with my husband, son, two cats, chickens and three dogs in the beautiful hills of Yorkshire. I love crystals, Reiki and angels. I’m a little bit obsessed with witchcraft too, but please don’t tell anybody.

I’ve always been an avid reader. There’s nothing better than snuggling down with a good book and visiting faraway lands. Of everything I read, and I read a lot, I have a weakness for the freedom that fantasy offers.

The Younglings—Shadows & Magic is my first published book, and it is the result of a promise I made to my sister before she passed: to publish one of my manuscripts. And here we are. I hope you love Quinn and the team as much as I have loved writing about them.