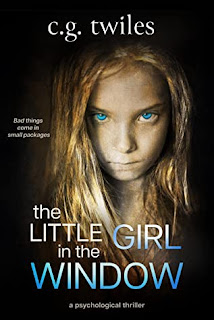 When pregnant prom queen Misty Glass dies, no one suspects who’s responsible: Romy, a fourteen-year-old loner with a desperate crush on Misty’s boyfriend.

Romy never meant for her “harmless” prank to turn deadly…

Twelve years later, she’s a successful artist living in the city when a crisis forces her to return to her rural hometown. There, she starts a relationship with the last man she should—and who has no idea Romy is behind the drowning of his high school girlfriend and their unborn child.

When a pale little blonde girl with eerily blue eyes starts hurling insults through Romy’s window before vanishing into the woods, Romy fears her past has returned with a vengeance.

She’s never told anyone about the worst mistake of her life. So how does the little girl seem to know about it? Who is she?

And how to stop her before she reveals Romy’s darkest secret?

A new twisty, suspenseful psychological thriller from C.G. Twiles, author of the top 800 Amazon Kindle bestseller The Neighbors in Apartment 3D, as well as The Last Star Standing, and Brooklyn Gothic.

I just want to comment on how creepy (in a good way) this book cover is. It caught my eyes and drew me in. Thus I wanted to read this book.

Author, C.G. Twiles is a new to me author. This is a fairly fast read. I was finishing chunks of chapters in one sitting at a time. However, I found this book to be more of a slow burning psychological thriller. Personally, for me I was hoping that the moments that were meant to be spine tingling did make me jump some. Yet, for readers that like slow burning psychological thrillers without a huge body count, this is one you might like. I do seem to be in the minority when it comes to me feelings with this book.