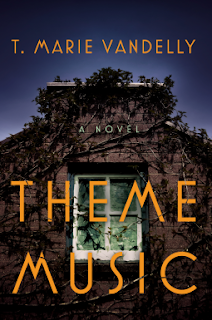 An utterly propulsive and unpredictable psychological thriller from stunning new talent T. Marie Vandelly.She didn't run from her dark past. She moved in.   For the lucky among us, life is what you make of it; but for Dixie Wheeler, the theme music for her story was chosen by another long ago, on the day her father butchered her mother and brothers and then slashed a knife across his own throat. Only one-year-old Dixie was spared, becoming infamously known as Baby Blue for the song left playing in the aftermath of the slaughter. Twenty-five years later, Dixie is still desperate for a connection to the family she can’t remember. So when her childhood home goes up for sale, Dixie sets aside all reason and moves in. But as the ghosts of her family seemingly begin to take up residence in the house that was once theirs, Dixie starts to question her own sanity and wonders if the evil force menacing her is that of her father or a demon of her own making. In order to make sense of her present, Dixie becomes determined to unravel the truth of her past and seeks out the detective who originally investigated the murders. But the more she learns, the more she opens up the uncomfortable possibility that the sins of her father may belong to another. As bodies begin to pile up around her, Dixie must find a way to expose the lunacy behind her family’s massacre to save her few loved ones that are still alive—and whatever scrap of sanity she has left.

I was drawn to this book due to the premise and a few of my reader friends had recommended it. I picked up this book a while ago. It actually took my two and a half times before I finished it. The first time I was not feeling the book. The second time was better but slow going. I walked away for a while and recently came back to the book.

This time around it was a much better experience. Although, I will admit that it was not until about the midway point where this story really found the groove for me. It did have the elements of being haunting. Dixie's story had my attention. The things that were happening to her within the house made for good reading. Plus, the ending was really good. I do look forward to reading more books form this author. Theme Music played a spell bounding tune of chills, a intriguing female lead, and a well written storyline.