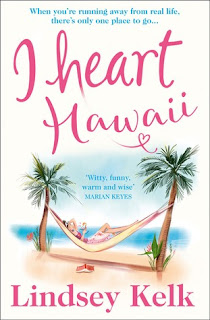 When you’re running away from real life, there’s only one place to go…
When Angela Clark’s best friend Jenny invites her to join a press trip to Hawaii, three days of sun, sea and sleep sounds like the perfect antidote to her crazed life.

At work in New York, she’s supposed to be the face of Having It All. But the only thing Angela feels she excels at is hiding in the printer cupboard, eating Mini Cheddars and watching Netflix on her phone and if this is living the dream, she's more than ready to wake up.

A few days away with Jenny sounds like exactly what she needs but Angela’s talent for getting into a scrape guarantees nothing goes to plan – and not even the most beautiful beaches, blue skies and daiquiris will get her off the hook…

This is my first taste of the I Heart series. I instantly fell in love with Angela and Julia. Angela is a bit neurotic and Julia is more free spirited. Yet, they balance each other out as good friends. Another person that has a good heart is Angela's husband. It is a good thing that he is so nice as he did act like a "typical" male. For example, when he acted like he was on his death bed due to a sprained ankle. The nurse was nice enough to admit him to the "man flu" ward.

Than there is The Mothers of Brooklyn and their leader Perry. The MOBs are like the Housewives. I have not seen any of the shows but just some clips Perry has a major crush on Angela's husband. The way she would try to get in Angela's good graces was funny.

The fun really began when the women went to Hawaii. There were so many laughs and antics to be had. The vibe of this book is cozy mystery, comedy, and contemporary. Book your passport for laughs galore with I Heart Hawaii by Lindsey Kelk.
Lindsey Kelk