Lost and Found In Spain 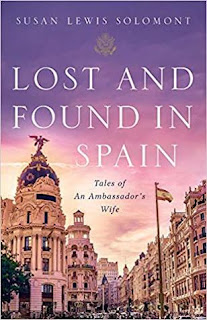 When her husband was appointed by President Barack Obama to be U.S. Ambassador to Spain and Andorra, Susan Solomont uprooted herself. She left her career, her friends and family, and a life she loved to join her husband for a three-and-a-half year tour overseas. Part memoir and part travelogue, Solomont recounts a time of self-discovery as she navigates a new life in a foreign country. She learns the rules of a diplomatic household; goes on a culinary wanderlust with some of Spain’s greatest chefs; finds her place in the Madrid Jewish community; and discovers her own voice as she creates new meaning in her role as a spouse, a community member, and a twenty-first century woman.

An insider’s account of everyday life in an American embassy that reminds us we are all looking for our place in the world, whether on the international stage or in our own hearts.

I thoroughly enjoyed this book. I just love when a book just comes together just right. While, this is one of the shorter books that I usually read, it was still good. I did not feel like I missed anything. In fact, it was like I was instantly welcomed by Susan from the first page of this book.

After reading this book, I really feel as if I have known Susan for many years as good friend. It is easy to see how her and her husband were welcomed so easily as ambassadors in another country. It does take someone who is quick on their feet and welcomes being in the spotlight to want to be an ambassador or any other type of position in the spotlight. In other words, not an introvert. I am an introvert.

Everything that Susan was describing as she encountered it in Spain gave me a great visual. This included everything from the food to the locations and people. Like Susan, I did find it interesting that the two things that the country picked up on to focus on with Susan and her husband were that they had money and were Jewish.

Readers who are fans of memoirs, true stories, or just looking for a good book to read should pick up a copy of this book. I do want to check out the next book from the point of view of Susan's dog as an ambassadog. 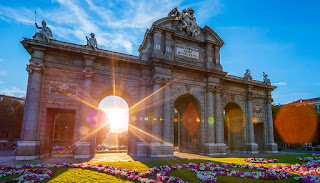 About Susan Lewis Solomont
Before her husband’s appointment as U.S. Ambassador to Spain and Andorra under President Barack Obama, Susan Lewis Solomont served as a philanthropic advisor at TPI (The Philanthropic Initiative) in Boston. In 2013, after launching numerous initiatives for women in business while in Spain, Susan was named International Woman of the Year by FEDEPE, the leading organization for Spanish women executives and directors. Earlier in her career, Susan worked as director of corporate development for WGBH-TV. A member of the Berklee College of Music board of trustees, she holds a bachelor of science degree from Cornell University and a master’s degree in education from Tufts University.