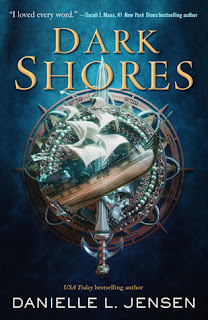 High seas adventure, blackmail, and meddling gods meet in Dark Shores, the first novel in a new YA fantasy series.

In a world divided by meddlesome gods and treacherous oceans, only the Maarin possess the knowledge to cross the Endless Seas. But they have one mandate: East must never meet West.

A PIRATE WITH A WILL OF IRON
Teriana is the second mate of the Quincense and heir to the Maarin Triumvirate. Her people are born of the seas and the keepers of its secrets, but when her closest friend is forced into an unwanted betrothal, Teriana breaks her people’s mandate so her friend might escape—a choice with devastating consequences.

A SOLDIER WITH A SECRET
Marcus is the commander of the Thirty-Seventh, the notorious legion that has led the Celendor Empire to conquer the entire East. The legion is his family, but even they don’t know the truth he’s been hiding since childhood. It’s a secret he’ll do anything to protect, no matter how much it costs him – and the world.

A DANGEROUS QUEST
When an Empire senator discovers the existence of the Dark Shores, he captures Teriana’s crew and threatens to reveal Marcus’s secret unless they sail in pursuit of conquest, forcing the two into an unlikely—and unwilling—alliance. They unite for the sake of their families, but both must decide how far they are willing to go, and how much they are willing to sacrifice

Having read Seafire by Natalie C. Parker, I was ready for another sea worthy adventure. Thus, I could not wait to check out this book. Sadly, for me this book was just "fine".  I did get the sea adventure but it was not just about the sea. There were politics in place as well. While, I did not mind that, it actually came down to the characters.

I agree with other readers that Teriana came off as a bit more childish then seventeen. In addition, I would have expected someone like her who seemed like a sea captain to be more like an adult. Whereas, Marcus was the more mature one in the story. These two were the main voices of this book.

This was a fast read but at the same time a slow one. Fast and slow because the chapters were short but I felt like nothing really thrilling was happening. The latter half of the story is better. I might read the next book just to see what happens further in this series.