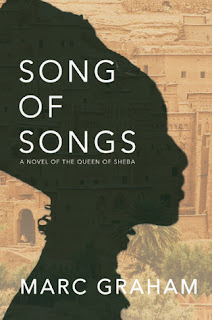 Lift the veil of legend for the untold story of Makeda, the Queen of Sheba, and Bathsheba, wife and mother of Israel’s first kings. When Makeda, the slave-born daughter of the chieftain of Saba, comes of age, she wins her freedom and inherits her father's titles along with a crumbling earthwork dam that threatens her people's survival. When she learns of a great stone temple being built in a land far to the north, Makeda leads a caravan to the capital of Yisrael to learn how to build a permanent dam and secure her people's prosperity.On her arrival, Makeda discovers that her half-sister Bilkis (also known as Bathsheba) who was thought to have died in a long-ago flash flood, not only survived, but has become Queen of Yisrael. Not content with her own wealth, Bilkis intends to claim the riches of Saba for herself by forcing Makeda to marry her son. But Bilkis’s designs are threatened by the growing attraction between Makeda and Yetzer abi-Huram, master builder of Urusalim’s famed temple. Will Bilkis’s plan succeed or will Makeda and Yetzer outsmart her and find happiness far from her plots and intrigue?

I thought this was a good book. Mr. Graham did a nice job of eveloping me into the world. I was instantly transported back in time. This book is got three voices...Bilkis, Makeda, and Yetzer. Each one does stand out.

Makeda has a bitter attitude. It had nothing to do with the fact that she was swept away during the flood. It is because she was jealous of Bilkis. Yet, Bilkis was nothing if not nice towards her sister. This is a case of sibling rivalry. Than you throw in the mix Yetzer.

This story is infused with life and a rich storyline. Yet, while I did like the characters and their voices, I struggled to form that deep connection with them. Thus there was like a barrier keeping me from fully embracing them. So it was kind of like I was a specter watching the story unfold. However, I would still suggest this book to someone looking for a new read.

Enamul Hoque said…
Best online earning site i have ever seen.Visit the site and earn online income
April 22, 2019 at 8:23 AM