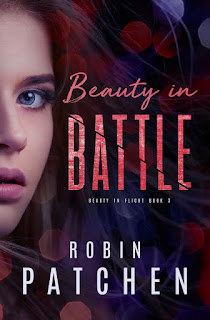 Book 3 in the Beauty in Flight Series:

The truth is out, but will it set her free or land her in the grave?

Harper doesn’t want to return to Maryland to face the police. The mess she left behind makes her look guilty of the worst, but it’s too late to run again. Red is safe and the authorities are waiting. At least Jack is by her side.

Now that Jack nows the truth, his feelings for Harper are deeper than ever. He’s not about to leave her side, especially knowing a killer is after her.

But Derrick is on their trail, and he’s come unhinged. And he may not be the biggest threat lurking.

The truth is out, but will it set her free, or will it land her in the grave?

The last thing Harper wants is to do is return Maryland to face the police and explain the mess she left behind, but with Red safe and the authorities waiting, she has little choice. At least Jack didn't abandon her, even after he discovered her lies.
Now that Jack knows the truth about Harper, his feelings for her are deeper than ever. Jack isn’t about to leave her side, and he'll protect her from anybody who tries to hurt her--or die trying.
But Derrick is on their trail, and he’s the least of their problems. How can they battle both Derrick and the killer who hides in the shadows?

The final book in this trilogy ends on a high note. So glad, that I did decide to stick the first book out. Harper won me over. She went from a victim to a fighter. Although, she did have some help along the way with Jack and Red. Both men that I am glad were in Harper's life.

Red helped to provide the humor. Either because of his age or he liked to embarrass Harper; he would say things that would make me laugh or smile. Maybe it was a little of both. Where Jack is concerned; he was the rock that Harper needed. He stepped in when he had to but allowed Harper to fight her battle. The chemistry between these two was sweet but nice at the same time.

If there was anyone that I hated more, it was Derrick. He is a horrible person. He did not care for either Harper or his grandfather, Red. All he cared about was himself.