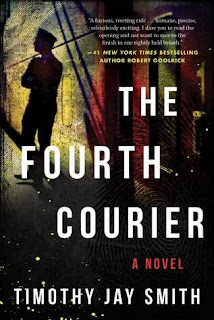 Smith’sdepictionofpost-coldwarPolandisgloomilyatmosphericandmurkyinaworldwherenothingisquiteasitseems.Suspenseful,thrilling,andsmart,TheFourthCourierbringstogetherastraightwhiteFBIagentandgayblackCIAofficerastheyteamuptouncoveragruesomeplotinvolvingmurder,radioactivecontraband,narcissisticgovernmentleaders,andunconscionablegreed.
It is 1992 in Warsaw, Poland, and the communist era has just ended. A series of grisly murders suddenly becomes an international case when it's feared that the victims may have been couriers smuggling nuclear material out of the defunct Soviet Union. The FBI sends an agent to help with the investigation. When he learns that a Russian physicist who designed a portable atomic bomb has disappeared, the race is on to find him—and the bomb—before it ends up in the wrong hands. Smith’s depiction of post-cold war Poland is gloomily atmospheric and murky in a world where nothing is quite as it seems. Suspenseful, thrilling, and smart, The Fourth Courier brings together a straight white FBI agent and gay black CIA officer as they team up to uncover a gruesome plot involving murder, radioactive contraband, narcissistic government leaders, and unconscionable greed.

I did like this book. It has the vein of a really, good thriller. There is intrigue, action, and plenty of movement to keep the story from becoming "stale". So, why did I not "love" this book? Well that is because I struggled to find my footing with the characters. There were many and yet none of them fully grabbed me where I could form a strong connection with them. Therefore, it does not matter how good a storyline a book can have; if I the reader can not form a connection with the characters who are supposed to tell and live the story, than, the rest fall to the wayside.

I will admit that the main lead Jay, was engaging. There were times that I did find myself really getting into this book and other times I could become easily distracted. It was like a roller coaster. If I had become fully engaged in this book, I can tell you that it would have been a five star read for me. Thus, I would read another book from this author. Just because I did not love this book does not mean that other readers should not check it out.