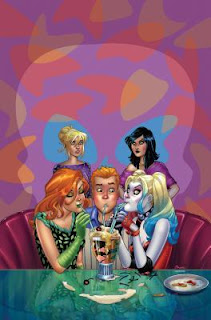 Gotham City meets Riverdale in this crossover graphic novel that brings together four of the most iconic characters in comics--Harley & Ivy and Betty & Veronica! From Paul Dini, Emmy and Eisner award-winning creator of Harley Quinn and BATMAN: THE ANIMATED SERIES, and Marc Andreyko, acclaimed writer of WONDER WOMAN '77.

Riverdale's resident billionaire, Hiram Lodge, has a plan to offer free college tuition. The town just needs to build a new campus by draining the wetlands that lie between Riverdale and Gotham City. Everyone is thrilled...except visiting ecologist Dalia Green, a certain botany-obsessed super-villain in disguise!

Poison Ivy realizes she must resort to drastic measures to thwart Hiram Lodge's plan to destroy the wetlands and the many species of endangered plants that live there. Scheming with her daffy bestie Harley Quinn, the villainous pair plan to kidnap Lodge's daughter, Veronica, and her friend Betty. Once Lodge abandons his building plans, Betty and Veronica will be returned safely--but not before mayhem ensues. Are these two teams of BFFs headed for disaster?
My Review
It has been years since I have read a comic book. When I was younger, I used to read them regularly. This did include the Archie comics. Yet, when I was reading them, the characters were portrayed as more innocent. This version of the Archie comics has the characters portrayed as sexier. However, this storyline has the characters acting like highschoolers including Poison Ivy and Harley Quinn. No, I want the bad guys to be "evil" not making me think they are all going to be friends over ice cream floats.
In fact, I was disappointed in this book and the good two shoes vibes that I was getting from the storyline that after reading to the half way mark I skipped ahead to the last couple of pages just to see how the story would end. Still not impressed. This comic did not get me excited to read comics again. It was a yawn fest.
Laura Braga Marc Andreyko Paul Dini