A Nanny for Christmas 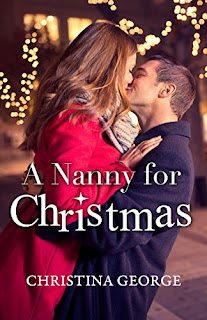 Willa O'Rourke is different from most would-be actresses as a nanny to the stars. But when the paparazzi catch her in the arms of Hollywood's sexiest lead man, Johnny Blaze -- also her boss, her reputation is ruined. And for nothing, because it's not what it seems, and she resisted his advances. But the public doesn't buy it and she can barely leave her apartment. She even has her own trending hashtag #dirtynanny.

Tail tucked between her legs Willa heads home to Harper's Corner for the holidays, where she finds more than just a lifetime of memories. She runs into Jack, her firefighter ex-boyfriend, and the sparks begin to fly even though they both fight it. Will they ignite into a Christmas flame that burns bright and hot or does Willa still want more than small town life?


This book reads like a Hallmark movie. This is a good thing. I think all us women can admit that we have seen one or even a dozen Hallmark movies. There is guaranteed to be a happy ending but at the same time, these movies give you a feel good feeling. That is what I got from reading this book.

Willa and Jack were great together. I felt the chemistry. While, they did share history together and it would have been very easy to jump right back into a relationship; I like that it took a few encounters together before they hooked up. Jack is Willa's knight in shining armor.

This book does give off the holiday vibes. A nice read to curl up by the fireplace during the cold, winter months. A Nanny for Christmas makes the perfect stocking stuffer.


Being splashed across the cover of People Magazine had always been Willa’s dream. For any aspiring actress, getting that much exposure to a national and even international audience was a sign that they’d “arrived.”


What Willa hadn’t wanted, however, was for this splash of fame to be a semi-fuzzy picture of her with a man’s hand on her ass while both of them, looking shocked, stared at the camera. The photographer had emerged from the bushes and shouted out to them. At the time, Willa managed to hold up her hand to try and cover her face, but she wasn’t fast enough, so it just looked like she was waving.


Not only was she an idiot, her crazy-curly red hair was frizzy that day.


Even worse, the white jeans she wore that day made her ass look fat.


She’d burned the magazine in her fireplace the minute the article came out.


Willa barely left her apartment after The Incident, which had catapulted her from being a no-name celebrity nanny to “The Nanny Who’s Sleeping with Megastar Johnny Blaze.”


The problem was, she wasn’t sleeping with him. Never had. Of course she’d been tempted. Any woman with a pulse would be. Johnny was the hottest Hollywood property in a long time. He was a wickedly hot combination of George Clooney, Jon Hamm and Bradley Cooper. He was the A-lister of A-listers, with a dozen hit movies to his credit, and as many producing credentials.


Not only that, but notorious bad boy Johnny had married the ever-sweet, overwhelmingly wholesome Melanie Rodgers, and together they had three adorable children. But a week after The Incident, Melanie filed for divorce, and “the dirty nanny,” as Willa was being referred to, had mysteriously disappeared.


Thanks to Melanie’s squeaky-clean image and the emerging scandal, Willa was being hounded by every crazy in the country. She’d been forced to shut down every one of her social media accounts, because every day a random new hater would post something awful. And if it wasn’t the haters, it was some loser looking for sex. She was out of a job, out of a career, and nearly out of money.


In post-Weinstein Hollywood, no one wanted to touch a nanny everyone believed was sleeping with the boss, no doubt to get ahead. Except for a few sketchy job offers from men who insisted they had “something she could look after,” Willa was certain she couldn’t even find a job working at a local drive-thru.


Everyone knew who Willa O’Rourke was, but the truth was none of them knew the truth. Except for her one good friend, Jade, who brought her food and wine and ice cream.


Mostly she drank the wine.


Johnny had vanished without offering a single explanation of what actually happened. He’d tried to hit on her, numerous times, but she’d always deflected. But on that day, his brand-new Aston Martin arrived and, being the daughter of a car fanatic, Willa couldn’t resist when Johnny offered her a ride.


The car purred exactly as she imaged it would. It was one of the sweetest rides she’d ever been in. It almost floated down the highway, and she was so enthralled with the car she hardly noticed when Johnny turned onto a narrow road, and she certainly didn’t see the car that was expertly following them.


When Johnny stopped the car, they were parked near a cliff, the sun was low on the horizon, and the early November air was starting to chill.


Johnny reached into the back of the car and grabbed his (of course) leather jacket. “Here,” he offered gently, smiling the million-dollar smile women all over the world swooned over.


“Why did we stop?” Willa asked, and in answer to her question, Johnny pushed open his door and got out.


“How about we watch the sunset?” He smiled again, and her knees went a little weak. Hey, she was only human. Wait a minute. Sunset? Willa checked her watch.

“School will be out soon, and I need to pick up the kids. We should really be heading back.”


Johnny walked over to her side of the car, opened her door, and held out his hand to help her out. She took it, already feeling a lump in the pit of her stomach, like she was about to make a colossal mistake.


“Your hair color...”Johnny murmured, in a voice so deep her lady parts nearly fainted, “...the way the red picks up the sun.” He gently took a handful of her hair and held it up to his lips.


Willa stepped out of reach, suddenly uncomfortable about where this was going.


“Johnny, I... I think we should go back…”As she said it, he closed in on her again, his tall, lean, well-toned body overtaking her, and his hand encircling her waist and then sliding down her hips, cupping her butt.


It wasn’t until he cupped her butt that Willa woke up to where this was headed.

He nuzzled her neck, and was working his way to her mouth when she finally had a chance to push him away, right when the shout came from behind them.


Her hand went up—too late of course. All she could hear was the click-click-click of the camera, and Johnny yelling something while he shoved her back in the car.


The photographer jumped behind the wheel of his Ford Escort and beat it out of there. But not before calling his editor to let her know he’d just taken the photo of the year.

Don’t spend another minute fighting with your spouse in pointless
passive aggressive behavior. This solution will set your mind
at ease once and for all.

There’s a simple, paint by numbers formula for saving your marriage
and it can be working for you in less than an hour.

Take back your relationship AND your life!

Secret to Marriage Reconciliation – Take Back Your Life

Talk to you soon,