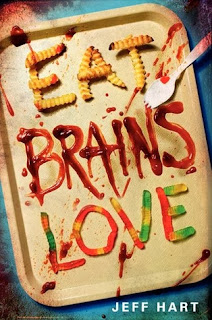 Jake and Amanda go to the same high school. Jake awoke this morning feeling sick. Maybe it was the book report that he had to turn in or maybe it was because he has turned into a zombie and just devoured half of his friends and classmates. Jake awakes to find Amanda by his side. Amanda has also turned into a zombie. Now they are on the run form the government.

Cass while a good psychic I did expect more from her. I thought she was suppose to be this big strong threat to Jake and Amanda. Instead she was just a puppet. I wanted Cass to give Jake and Amanda something to fear. I found after a while that I wanted to just read Jake and Amanda's parts. When I got to the end, I was somewhat like "This is it?"
Jeff Hart