The Light Between Oceans. O-M-G! This book is one to treasure 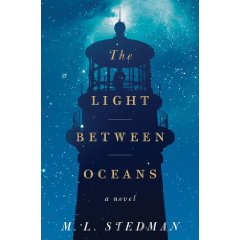 Tom spent four years in the war. He has returned home now for a more peaceful life. He takes a job as a lighthouse keeper. Tom meets Isabel. They get married and Isabel moves with Tom to the island where the lighthouse is. Tom and Isabel's dream of having a family is crushed when Isabel suffers a miscarriage. A miracle happens when Tom and Isabel are given a second chance but at what cost?


After reading the book summary for this book. I knew I had to check it out. O-M-G! This book is one to treasure. You should probably pick up two copies for yourself. One to display on your bookshelf and the other to read over and over again.

I can not imagine the situation and choice that Tom and Isabel faced when they first met Lucy. To be honest, if I was in their situation, I probably would have done the same thing. IN my eyes though, Lucy will always be Lucy. The ending did have me tearing up. It was a sad but happy moment. I would have to say however that I felt that first three quarters of this book were the best. When Tom and Isabel's secret was revealed is when the story, while still good felt a little rushed. Like since so much time was spent on Tom and Isabel's story that the ending was near and so there was not much more time that needed to be wasted on telling any more of the story. The Light Between Oceans is author, M.L Stedman's debut novel. If this is what Ms. Stedman is first coming out of the gate with then I can not wait to see what she has in story with her next book. The Light Between Oceans is a must read!