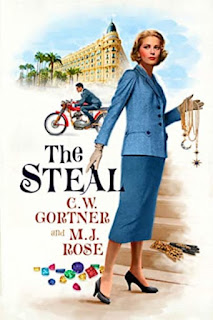 They say diamonds are a girl’s best friend—until they’re stolen.Ania Throne is devoted to her jewelry company. The daughter of one of the world’s most famous jewelers, she arrives in Cannes with a stunning new collection. But a shocking theft by the notorious thief known as the Leopard throws her into upheaval—and plunges her on an unexpected hunt that challenges everything she believes.Jerome Curtis thinks he’s seen it all, especially when it comes to crime. Until he’s hired to investigate the loss of Ania Thorne’s collection, his every skill put to the test as he chases after a mysterious master-mind responsible for some of the costliest heists in history—and finds himself in a tangled web with a woman he really shouldn’t fall in love with.From the fabled Carlton Hotel to the elegant boulevards of Paris, Ania and Jerome must race against time to catch a thief before the thief catches them. With everything on the line, can they solve the steal or will the steal take more than diamonds from them?Set in the late 1950s, THE STEAL is a romantic caper by bestselling authors C.W. Gortner and M.J. Rose.

I have read books from both of these authors. In fact, I am a fan of MJ Rose. Therefore when I saw that these two authors had teamed up I had to read this book. It is a fun, quick read. I was definitely getting the vibes of the nineteen fifties. Readers of cozy mysteries will want to check out this book.

Instantly, I was transported back in time with Ania and Jerome as they tried to track down and stop the infamous Leopard, jewel thief. They dynamics between Ania and Jerome is nice. At first I did feel like Jerome came off a bit chauvinist towards Ania. However, the more the story progressed, he and Ania worked well together.

The ending does lead to there being more to come hopefully with these two. Which I can see being a nice series. My only fault with this book is that I did not personally jive as well with Ania and Jerome but if there are more books, I could see myself getting closer to them.