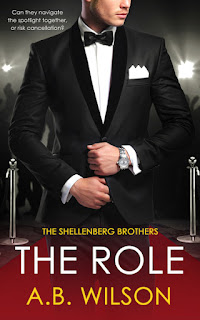 Rebuild. That’s Markus’ plan after a disastrous role and explosive public breakup with the girl he thought was The One. The bit part he originally agreed to take on after losing a bet now seems like his last opportunity to pull his career back from the brink. When he walks onto the set, he finds a TV show on the verge of cancellation and the paparazzi circling like vultures watching for what—or who—he’ll try to do next.

When Markus is introduced to the director’s muse and the show’s on-location assistant producer, Alina, sparks start to fly and the two strike up a tentative friendship among the lights and cameras of the gossipy set. The ambitious and hard-working Alina has zero interest in getting sucked into Markus’ celebrity gossip drama, but she may not have a choice as one disaster after another befalls the set.

A chance screen test and some serious groveling by the show’s director leads to Markus and Alina taking on major roles in a desperate attempt to save the show from network cancellation. Now in front of the camera, Markus and Alina are bound together as love interests and the line between private and public starts to blur. As life begins to imitate art, Markus and Alina get ground to dust by the celeb gossip mill seeking the ‘real’ story behind the two of them. If they can come back from this and save the show, they’ll be the next Hollywood power couple.

I did like this book. The chemistry between Alina and Markus is hot. There is no denying that factor. It helped that Markus is not portrayed as a rich, snobbish actor. He is very likable from the beginning. He is not intimated by independent women like Alina. In fact, it was nice to see a romance book where the female is more prominent as the lead.

I do agree with other readers that the first half flew by really fast with the latter half slowed down. Yet, that did not mean that the chemistry was gone. It just meant that Markus and Alina took things a bit slower.

This book is a nice start to this series. I liked it enough that I would read book two to see how Markus and Alina get on in the rest of the series.